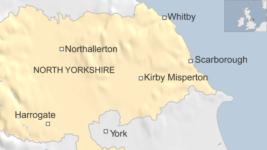 North Yorkshire County Council have approved an application to frack for shale gas. Despite protesters gathering outside the Council offices yesterday, the North Yorkshire County Council granted permission for fracking at Kirby Misperton in Ryedale. A series of submissions from 75 people, some for and some against fracking, were heard in the days before the final decision was made.

Simon Bowens, Yorkshire and Humber campaigner for Friends of the Earth, said: “This is an absolute travesty of a decision but the battle is very far from over.

“Today seven out of 11 North Yorkshire county councillors voted to approve this fracking application in Ryedale, ignoring the objection of Ryedale District Council itself, as well as thousands of local residents and businesses.

“Despite this decision, public support for fracking is plummeting as Wales, Scotland and countries across Europe have suspended it. The risks to people’s health and the environment are unacceptable and we will fight on.”

Fracking, which is short for hydraulic fracturing, is the process of drilling down into the earth and firing a high pressure mixture of water, sand and chemicals into the rock, releasing the gas inside.

Opponents say it can cause water contamination, earthquakes and noise and traffic pollution.

Richard Black, Director of the Energy and Climate Intelligence Unit (ECIU), said: “Although proponents of fracking will claim today’s decision as a victory, the fundamental questions around UK shale gas haven’t changed.

“As we see from protests outside the council today and from opinion surveys, the public is not supportive, and the economics remain unclear – so whether commercial fracking ever goes ahead is still an open question.

“Other issues also remain open. Last year, the Commons Environmental Audit Committee said fracking is incompatible with our climate change targets, and the government hasn’t been able to show they’re wrong. If leakage rates are above a few percent, gas burning turns out to be worse than coal for climate change, and yet the government hasn’t set a maximum permissible leakage level.

“Lastly there’s the fact that the UK won’t own the gas – it’ll belong to the company extracting it, who will presumably sell it into the European market, at market rates. So whether it would really do anything for energy security or for bills is very much open to question.”

The bid by Third Energy, which was recommended for approval two weeks ago, could be the first fracking operation in England since a ban on the process was lifted in 2012.

Daisy Sands, Head of Energy campaign at Greenpeace,  said: “Given the pro fracking bias from central government, there was an air of inevitability about this bitterly disappointing decision. It is striking that the overwhelming number of speakers giving evidence at the two day hearing were against fracking and Ryedale Parish Council voted against fracking at its back door but North Yorkshire Council has overlooked this and the many, many concerns that were raised locally. But this isn’t over and people will continue to raise their very valid concerns and keep fighting against fracking because it will industrialise the beautiful Yorkshire countryside and contribute to climate change.”

Richard Claxon, from Filey, a Greenpeace volunteer who has campaigned against fracking in Yorkshire, said: “It’s a huge disappointment for people in Ryedale and beyond who have been campaigning tirelessly to keep this part of Yorkshire free from fracking. There is a real coalition of people from different backgrounds and walks of life who have come together to stop fracking in this area.

“Fracking will cause huge air, noise and light pollution for local residents, and contribute to climate change that will affect us all. This is why the council and government can expect renewed efforts from local residents and campaigners from across the country to keep Ryedale, and beyond frack free.”