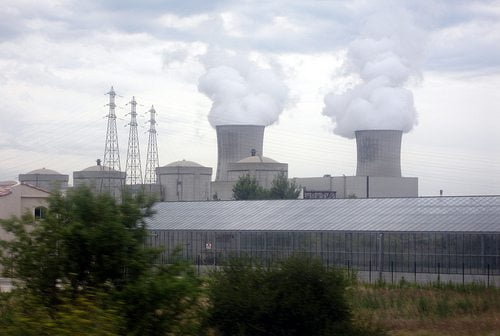 Greenpeace activists have broken into a nuclear power plant in south-east France and demanded its closure.

The Tricastin site, which is owned and run by French company EDF, is being targeted due to the danger it poses, according to the protestors. They broke in on early Sunday morning and called for it to be shut down.

The activists also unfurled a banner bearing the words, “Tricastin, nuclear accident – president of the catastrophe?” above a picture of French president François Hollande.

Yannick Rousselet, a spokesperson for Greenpeace France said, “With this action, Greenpeace is asking François Hollande to close the Tricastin plant, which is among the five most dangerous in France.”

There have been a number of incidents at the site over recent years, including the accidental spill of almost 18,000 litres of Uranium solution. The Commission for Independent Research and Information on Radioactivity (CRIIRAD) reported levels of radioactivity in the vicinity as being 5% higher than allowed.

A protest was also recently held in China where activists managed to convince authorities to scrap plans to build a $6 billion uranium processing plant. Local residents were similarly concerned over safety.

In Europe, there has been widespread debate regarding nuclear energy as a power source since the Fukushima disaster in Japan back in 2011, which claimed the lives of almost 16,000 people and devastated many more.

In the immediate aftermath of Fukushima, Germany took the extraordinary steps of decommission its entire nuclear fleet – replacing it with renewables and high-polluting coal. German ministers last week hailed the country’s subsidy scheme for solar power as a great success.

In the UK, Greenpeace activists successfully scaled the tallest building in western Europe last week, the Shard, in a protest against oil giant Shell’s drilling activities in the Arctic.

Greenpeace climbers conquer shard in an effort to save the Arctic