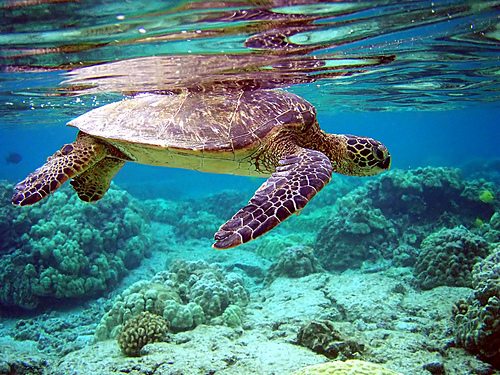 “Any turtle that gets through to adulthood is precious”, says Roger Downie, honourary professor of zoological education at Glasgow University.

It is estimated that only one out of every 1,000 turtle hatchlings survive to reach reproductive maturity. Many fall victim to predators such as crabs, birds or even raccoons. However, through pollution and manmade climate change, we humans are partly responsible, too.

“Effectively all the species of marine turtles are classified as endangered species, under various levels of threat concern”, says Downie.

A study, published last week in the journal Conservation Biology, found that some species of turtle are now swallowing twice as much plastic as they did 25 years ago. The study looked at data collected from around the world since the late 1980s and found that green and leatherheard turtles are ingesting more “anthropogenic debris” – manmade waste – than ever before.

Downie has worked on turtle conservation projects in Trinidad & Tobago, and Cyprus. He explains that turtles are particularly vulnerable to plastic pollutants. Some species prey on jellyfish, and mistake floating, transparent plastic bags for food.

“The plastic has been shown in some cases to clog up the gut of a turtle so badly that they can no longer feed properly and essentially starve to death”, he adds.

Turtles have backwards-facing spines in their throats, an evolutionary trait which allows them to grip their prey. Unfortunately, this means they cannot regurgitate plastics or other pollutants that they mistakenly ingest.

And of course, pollutants are just one of the manmade dangers these turtles face. Tourists have invaded many of their natural nesting beaches, and they can be caught, sometimes accidentally by fishermen, or sometimes deliberately.

“They’ve been overexploited, in terms of people catching them. Of course, they’re very easy to catch when they come up onto the beach to lay eggs, and in some societies turtle eggs as well as turtle meat is regarded as a delicacy”, Downie says.

Turtles are also vulnerable to what is known as ‘ghost fishing.’ This occurs when a fishing net breaks free from a fisherman’s boat, and independently drifts through the water catching fish, turtles, and other forms of aquatic life as it goes along. An online image search provides plenty of gruesome evidence of this phenomenon, with haunting pictures of skeletons trapped in nets at the bottom of the ocean.

And then of course, there is climate change.

Downie says, “Turtle eggs require a particular temperature to develop on beaches. If climate change leads to those temperatures changing that may affect the survival rate of the hatchlings and ultimately have a very serious effect on their long-term survival. So doing something about climate change is as important for turtles as it is for everything else on the planet.”

However, researchers are increasingly concerned about the potential effects of a ‘new’ form of pollutant. Dr Alex Ford, a reader in biology from the University of Portsmouth with experience as a pollution control officer and a turtle biologist, says, “In the past biologists generally used to look at what concentration of pollutants was harmful. Now we tend to look at the more subtle effects that might be going on, looking at what concentration might affect an organisms growth or its behaviour or its reproduction.”

This involves studying the effects of ‘novel compounds’. The phrase ‘marine pollutants’ may traditionally bring to mind images of beaches smothered in oil, whereas novel compounds are somewhat less familiar.

By their very nature, novel compounds are trickier to understand and to deal with. This category includes things such as pharmaceuticals and nanoparticles – pollutants that are inconceivably small but still potentially deadly to aquatic life.

Pharmaceuticals such as oestrogens and antidepressants have already been found to have contaminated the marine environment. Through a process that is probably best not elabourated on, these drugs end up in sewage treatment plants, where they are not fully broken down, then released into local rivers and eventually find their way into the sea. Evidence has shown that even in small concentrations, oestrogens have ‘feminised’ male fish, with potentially chronic impacts on the sustainability of whole species.

When they eventually break down, plastics also fit into this category. Ford explains, “They break down into such a small size that they can actually translocate through an organism.

“This means that particles of plastic can find their way out of the stomach into the blood stream of the animal, and can cause serious damage if it finds its way into an organ.“

Some microplastics are a particular problem, as they act like a sponge to other pollutants and soak them out of the environment. This may sound like a good thing, but when an animal ingests this plastic, it means that it is ingesting countless concentrated pollutants.

These pollutants can then be passed up through the food chain; meaning animals that were never exposed to the plastic particles can be harmed as well. This should be of concern to us, when it is considered that often the animals at the top of the food chain are humans.

Efforts are already underway, Ford says, to limit the impact of novel compounds on turtles and other marine life: “Manufacturers are working hard to develop more biodegradable plastics. And I think, certainly in the UK, that landfill tax has gone quite a long way to making us think about what we’re putting into our environment.” There is evidence that taxes could prove very effective in reducing the distribution of plastic pollutants. In the Republic of Ireland, a tax on plastic bags cut the use of new bags by 90%.

Also important is that we build better sewage treatment works, to ensure that pharmaceutical compounds don’t make it out into the environment. However, Ford says, “There is also an onus on us. With any pharmaceuticals we don’t use, we shouldn’t chuck them in our garbage, we should take them back to our pharmacy and get them to dispose of them appropriately.” This practice is already enforced by law in some European countries.

Such measures won’t fix the problem of marine pollutants alone. Certainly, they won’t solve all the problems of the endangered species of marine turtle. However they are surely small prices to pay in order mitigate our contribution to the decline of so many vulnerable species.