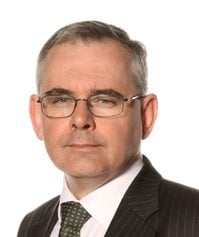 Growing increasingly concerned by investors’ failure to factor in the risks of climate change and other irresponsible practices, Howard joined the sustainable development charity Forum for the Future. Soon after, UKSIF’s top job beckoned.

With UKSIF’s flagship awareness raising event Good Money Week underway, Howard speaks to Blue & Green Tomorrow about the rebranding of National Ethical Investment Week, discusses the rise of sustainable investment, and explains why we should all share his concerns.

Simon Howard: National Ethical Investment Week (NEIW) was a great success, it began to get us mainstream media attention but we think there’s more that can be done if the branding is made a little bit more user-friendly. NEIW just sounds a bit clunky. Good Money Week is a rather simpler concept. We’ve got a cute new logo, that’s very sweet and welcoming.

The aim is to make the campaign broader and more inclusive, and whilst we have a great deal of time for and fervently support ethical investors – that phrase has puzzled some media commentators.

I think the idea of good money as opposed to bad money is a very inclusive concept, I think everybody can get that pretty easily, whereas words like ethical – I think some people won’t want to engage with. It’s more about clarification.

Ethics is still very much a part of Good Money Week, but I think by changing the branding, we can focus more on the positives rather than giving an easy hit to the sceptics. There’s a variety of positive new forces behind it.

B&GT: Are the message and the target audience changing with the name?

SH: In the two years I’ve been involved, the target audience has always been in my mind every citizen, everybody in the UK, and so in that sense it hasn’t changed. But I think the emphasis on reaching new people has increased.

Finance affects everybody. We want everybody to be thinking about what their money is doing.

As for the message, no. I don’t think the message has changed. We’ve used pretty consistently the message of “make money and make a difference” and I think that’s still core to the idea – that you can get a sensible and good return on your money whilst doing good.

Perhaps there is a change of emphasis. We certainly don’t want to be perceived as abandoning or moving on from the people who’ve supported NEIW for years – the faith community and some of the financial advisor community are still going to be central to this year’s Good Money Week. We just want to push it further, using that success as a foundation to spread the message more widely.

B&GT: Are there any new areas Good Money Week will be expanding into with that change of emphasis?

SH: One area we hope to do more on this year is banking. I think there’s a lack of understanding on the part of the general public about what the banks are doing. Everybody knows the banks have done bad stuff, but the banks are increasingly doing some good stuff.

Some big bangs like Barclays and Co-op have a commitment, and some of the smaller banks like Ecology and Triodos have an even more explicit commitment, to doing good.

We want to flag that and advertise that and let people know when they bank with a bank they are funding investment in local SMEs, they are funding mortgage lending. It’s not all libor rate fixing and interest rate fixing. Their money is already doing social good. We’d like to give that thinking an airing. And that obviously applies to a large number of people who might not think they are involved in financial services.

B&GT: How much of an impact do these awareness raising events have?

SH: I think they’re definitely worthwhile. I think what these weeks do is make it clear that there’s validity to the concepts that people may have heard about only vaguely before. They may have picked up one item on the news but when they start to see these campaigns they begin to realise that these concepts do have a solid foundation.

How you can measure that is very difficult, but I have no doubt that this is a good use of our time.

B&GT: What will constitute a success for Good Money Week?

SH: It’s very tricky to answer that. In the past we’ve done opinion polls that have shown a tick-up in awareness. But that’s quite expensive and they all come with a margin of error.

We have traditionally monitored media hits, and we probably will do that again. I think what we’ll try and do this year is come up with some metrics that cover more of the reach, so its how many people read that newspaper, how many people heard that radio broadcast. It’s about how many people have heard about the week, during the week. We need to find an effective way of measuring that. But I think we will know if it has been a success.

B&GT: What has changed in this sector since the last NEIW?

SH: We’ve seen continuing product development, which is very welcome. FTSE have launched some fossil free indices with Blackrock and Threadneedle launched the UK Social Bond Fund. Both of those are very interesting developments.

More generally, the fossil free debate is gathering traction, and generating a lot of talk among students and among some charities. That’s very important.

B&GT: Do you think enough progress has been made in the last year?

SH: No, clearly not. But I think the direction of travel is promising. We will win but the question is whether we will win fast enough. We’re clearly not moving as fast as we need to.

B&GT: You’ve lead UKSIF for more than a year now. What have you learned about the ethical and sustainable space in your time there?

SH: I’ve learned how very able and very committed many, many people are in the space. If you look at the UKSIF membership, we have a lot the very biggest and best firms. There are a lot of good people out there, it’s just a matter of coordinating them and pushing them together.

B&GT: What is the future for Good Money Week?

SH: Broadening is the key. Until we have a stream looking at almost every area of finance, there’s always scope for Good Money Week to grow.