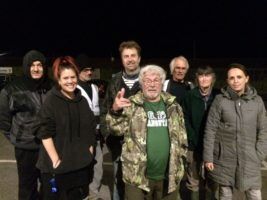 TV naturalist and campaigner Bill Oddie has joined forces with Humane Society International ahead of National Badger Day on 6th October, to spend a night out with the Wounded Badger Patrol in the Dorset badger cull zone.

In August this year, the government began the roll out of its widely discredited badger cull to seven new areas across three new counties in England, bringing the total number of cull zones to ten, across six counties [Cornwall, Devon, Dorset, Gloucestershire, Herefordshire and Somerset], despite continued calls from leading experts to abandon the cull as unscientific and inhumane.

A YouGov poll commissioned by animal charity Humane Society International/UK revealed the high level of concern the public has for badger welfare, with 67% of respondents saying they would be concerned at the suffering caused to badgers if the cull went ahead in their counties. This concern is reflected in the number of ordinary local residents who join Wounded Badger Patrols night after night to check badger setts and look for injured animals.

In a video message recorded on the night of 3rd October by HSI/UK’s director Claire Bass, before she and Bill Oddie set off with the Dorset Wounded Badger Patrol, the veteran wildlife presenter spoke passionately about his opposition to the badger cull.

Bill Oddie said: “The first thing is that the fact that we’re still going through this rigmarole of will the badger cull improve the situation as regards bovine TB, a subject which was first mooted in scientific papers something like 10 or 20 or even 30 yrs ago and has actually been active for the last 2 or 3 years, and this government are intending to go on for another half dozen years, is astonishing. I mean there’s something wrong if they still haven’t worked out if it works or it doesn’t work. Except of course that they’re taking no notice of all the scientific evidence which says this doesn’t work. And therefore you look at the second phase and you say what’s it doing to the badgers as well. And it’s a cruel process there’s no two ways about it. Obviously there are some shot that are not killed instantly, it’s the same in the shooting industry, the same thing there, birds shot but they don’t instantly die…But it’s almost like ‘We are the government, you are the NGOs, you do not tell them what to do, we’re in charge’, and it reminds me of some bloody-minded teacher or 6th form bully or something, who says we’ve decided what we’re gonna do and we’re going to do it. And there’s no other reason than that.”

“And thank god we get people like these lovely people at the back there who – I love the fact that they’re sometimes referred to as sabs, ooh saboteurs, you know in balaclavas. But they’re not, they’re just normal people of all ages, all types, all backgrounds, who feel so strongly that they’re going to come out here just about every night and go out into the country where they know there are various badger setts and they also know there are people waiting with guns. And they’re very careful, they’re not violent, they’re not confrontational but they are going to try and stop any gratuitous slaughter of badgers. And well frankly, my hat goes off to them.”

In Wales, the government has rejected badger culling in favour of stricter controls over cattle testing, cattle movement, and on-farm biosecurity protocols. The number of cattle slaughtered because of bovine TB has significantly reduced in Wales over recent years.

It was a starlit, peaceful night and I’m relieved to say that the only badgers we spotted that night were very much alive, viewed through our infrared camera as they snuffled about in the undergrowth.

“At one point we heard gunshots in the distance and had a sobering sense of just how vulnerable badgers and other wildlife are – their only line of defence is the compassionate people who make up the Wounded Badger Patrols. Simply peacefully patrolling near the badgers can be enough to displace a shooter and save lives, and of course they are on constant look out for wounded animals. Knowing that this much-loved and supposedly protected wild mammal is under siege so close by is very motivating – I’d encourage anyone who can spare some time at night to visit www.teambadger.org/wounded-badger-patrol to find your nearest patrol in the six counties where culling is currently taking place.”

“There is no justice in killing badgers when all the science says killing badgers will make no meaningful difference to the incidence of bTB in cattle. So, we fight to protect badgers from ignorance, persecution and cruelty. And if we don’t fight for the badgers, who will? The badger culls are ignorant and cruel so it is important that we fight for justice. Having Bill Oddie visit us here in Dorset, to show such support for the cause, was a major boost for the troops. We know we are not alone in this fight but it is always motivating when somebody as high profile as Bill is prepared to put his head above the parapet, and give his time, to show his opposition to the cull. If we are to stop more unnecessary killing of badgers we need yet more people to join us and to walk the countryside by day and/or night and, for those who might find this difficult, there are other roles to be filled.”

Please support Wounded Badger Patrols: Details of the Dorset group, Dorset for Badger and Bovine Welfare (DBBW) can be found at: https://dorsetbandb.org/