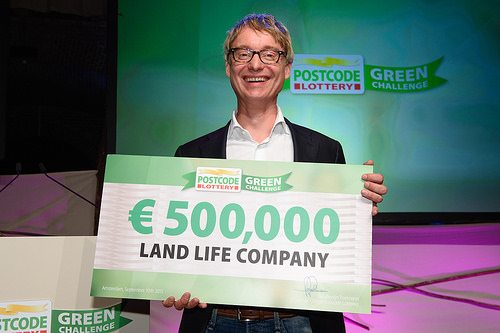 A global search – inspired by former United States President Bill Clinton – to find the world’s smartest eco entrepreneurs has been launched this week.

The Postcode Lottery Green Challenge – which offers a €500,000 first prize – is now in its 10th year and individuals or businesses who provide products or services that can reduce CO2 emissions are eligible to enter. Inspired sustainable entrepreneurs across the world have until 1 June 2016 to submit their business plans. Candidates can enter their business plan via www.greenchallenge.info. The winner will be chosen by an international jury at the finals in Amsterdam on14 September 2016.

Arthur Kay, Founder and CEO of 2014 winner bio-bean, said: “Winning the Postcode Lottery Green Challenge came at a vital point in bio-bean’s growth and has been fundamental in making bio-bean a reality. I can’t wait to see what this year’s crop of low-carbon entrepreneurs deliver.”

In 2015 Land Life Company, an organisation that develops biodegradable incubators took the top prize. These enable young trees to survive in extremely dry climates and as such, help eliminate irrigation and maintenance in reforestation. The prize money enabled the realisation of large-scale demonstration projects in Mexico, Spain and California. Other winners of the prize include, American Ginger Dosier’s company bioMason who won the major prize for creating environmentally-friendly bricks which are already being used in several building projects.

Green Challenge was launched in 2007 following Bill Clinton’s visit to the Netherlands at the invitation of the Postcode Lottery.

He spoke about the importance of supporting entrepreneurs in the field of sustainable innovation in the battle against climate change and inspired the Dutch Postcode Lottery to establish the Postcode Lottery Green Challenge, which started a year later.

Over the past nine years, the competition has proven to be a platform for promising startups in the field of CO2 reduction.

In addition to the prize money for the winner and the runner-up, a place in the finals guarantees international media attention and greater trust among investors.