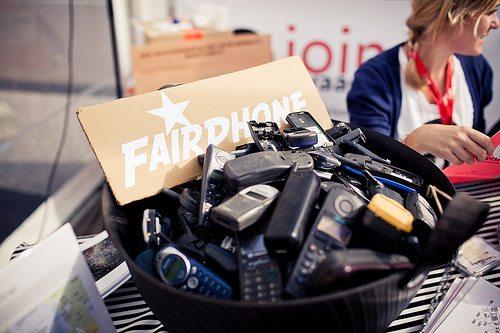 How fair is your smartphone?

Introducing Fairphone: the world’s first “ethical” smartphone. At first glance, it appears to be just like any other. While some reviewers have said its competitors may beat it in the technology department, when it comes to moral superiority, Fairphone wins hands down.

The unique selling point of the device lies not with the phone itself, but with the team behind it. Led by Bas van Abel, Fairphone’s manufacturers are dedicated to creating a “fairer smartphone economy”, taking into account the exact impact that their activities are having on the real world.

The concept of Fairphone started after a campaign in 2010 sought to highlight, according to its creators, “abuses in electronics supply chains”. The social enterprise soon saw their pipedream of creating a completely ethical phone as actually tangible.

“Using existing initiatives such as Conflict-Free Tin Initiative and Solutions for Hope, we managed to ensure sources of tin and tantalum are conflict-free and we’re trying to be as transparent as possible throughout the supply chain, from the mines to the factories to the end user”, says Tessa Wernink, communications director at Fairphone.

Wernink adds that Fairphone acts as a platform to bring together all of the issues of social and environmental value that the electronics industry can have.

Although the company admits that it is a very small challenger to a massive industry, Wernink says that its aim is to show “best practice” by inspiring both industry and consumers to completely rethink which phones they use. She adds that some of the bigger smartphone companies are also working towards more ethical handsets, and concedes that Fairphone may not be necessary if the industry does indeed change for the better.

The Fairphone handset itself is made from materials that are sourced from places where the demand for such materials does not create conflict, war or inequality. The tin used comes from mines in South Kivu Province in the Democratic Republic of Congo (DRC) and the tantalum comes from conflict-free mines in the north of the country. Fairphone claims that every material used to manufacture its device is precious, and by buying its phone, you can “change the way the industry sources, processes and perceives these precious materials”.

But its ethical mission does not stop there. Fairphone strives to ensure that every worker involved in the production of its smartphone is paid the living wage, a luxury much coveted by many employees working in supply chains around the world. We know from the developments this year in the global supply chain that often, the high demands of western consumerism come at the cost of the basic rights of those living in under-developed countries. Fairphone, along with many other organisations and companies, is working to address these issues.

But do these ethical considerations mean that you’ll be paying through the nose?

Well, if you put it next to Google’s Nexus 4, which has a similar kind of specification, you’ll see that it may cost a little bit extra. Whereas Google’s device retails at £199, the Fairphone was launched in September with a price tag if £274.

However, the beauty of the price is that the company publishes a complete breakdown of every single penny that you are spending and where that is going. According to their website, €185 is spent on the product itself with €45 spent on admin and operational costs and just €22 on making sure that the process of manufacturing the phone does not impact on the lives of the workers. This includes a workers’ welfare fund and the cost of mitigating the impact of e-waste, a problem that was recently said endangers the health of more than 200 million people around the globe.

In actual fact, when considered that the removable battery significantly increases the lifespan of the smartphone, that little bit of extra cash is probably worth it in the long run. But probably one of the most unique features of this smartphone is that it houses two SIM cards, meaning that the user can alternate between work and personal mobiles without needing to carry two handsets, but also cutting back the number of mobile phones in circulation.

Let us hope that Fairphone manages to disrupt the status quo within the smartphone industry, rustle up a few feathers and get the big players to focus on making their phones more ethical. It’s a refreshing change to see a smartphone company working not for mass profit or in the interest of its shareholders, but for mass social change in the interest of the planet and its people.

Nike launches iPhone app to score sustainability of its products