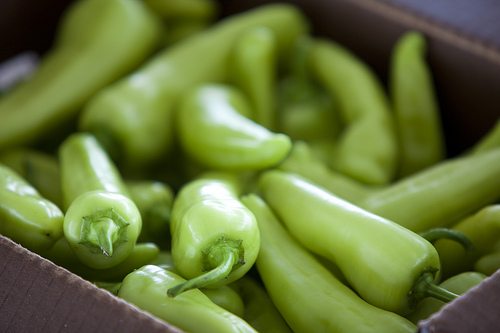 But for a while, Rapposelli stalled: he didn’t believe an auction in rural, Appalachian Ohio could provide nearly enough produce for his needs — after all, as executive chef at Ohio University he was serving three meals a day to roughly 8,000 students. Besides, Morgan County — where Chesterhill is located — had been a food desert, where people had to travel for miles to find fresh food.

“For Chesterhill, they have two convenience stores, but you can’t buy a tomato there“, explained Fedyski, a specialist in local food for Rural Action, a community development non-profit.

But finally, one summer afternoon several years ago, Fedyski offered up a compromise: he and Rapposelli would go for a motorcycle ride (“a common addiction“) and end up at the Chesterhill Produce Auction.

They pulled up to an open pavilion, whose broad roof and open garage shaded a concrete patio. Twice a week, May through October, this patio floods with boxes of seasonal produce for the auction block, from apples to squash to, yes, tomatoes. During these auctions, horse and buggy teams can be spotted between the parked cars; many of the auction’s most prolific farmers are Amish and live just miles away.

“I was stunned“, Rapposelli remembered of that first visit. “Number one, seeing where it was, because it is in the middle of nowhere — it is out. And I was amazed at the number of people who were there: the purveyors, the buyers, and the spectators.”

The auction is not only a bustling sight — it’s also something of a novelty. A produce auction guide printed in Ohio counts only 50-plus auctions in the entire United States. But Chesterhill and Ohio’s eight other produce auctions fill a critical niche — bridging the gap between small producers outside the world of industrial ag and a lower-income populace in need of healthy, affordable food.

One in six Ohio residents works in the agriculture industry, and the food and ag industries contribute an estimated $79 billion (£48 billion) to the state’s economy each year. Yet nearly 90% of the food Ohioans buy comes from outside the state, according to a 2011 report from food systems analyst Ken Meter of the Crossroads Resource Centre. The result, Meter estimates, is that Ohio’s economy loses $30 billion (£18 billion) a year.

Boosting in-state food purchases to 15% could increase farm incomes by $2.5 billion (£1.5 billion), Meter estimates. And Brad Bergefurd, extension educator in agriculture and natural resources with Ohio State University Extension, thinks produce auctions have already made a big difference when it comes to keeping local food in the state.

How a produce auction works

Farmers markets are often clustered around bigger towns, like nearby Athens. But for several reasons, those markets are not ideal for a large proportion of farmers. They’re too far to reach by horse and buggy, they often require a farmer to spend all day preparing and tending to the booth, and there’s no guarantee that all the produce will sell.

Produce auctions help to solve these problems. “The produce auction, you can take everything out there that you have that day, everything sells, and you don’t have to bring nothing home“, said Karen Blackburn, who sells a broad variety of produce, from raspberries to kale, at the Chesterhill auction.

Auctions typically take a 10-15% commission on sales to cover the costs of marketing, the auctioneer and the facilities. The initial investment makes up the biggest cost for most auctions.

Bergefurd has been involved in every one of the state’s produce auctions, in one role or another, since the first was founded in Geauga County in 1992. The initial investment for the Chesterhill Produce Auction was nearly $150,000 (£90,000) — much of which was used to construct the building and driveway. Some of this funding came from Ohio Farm Bureau Foundation grants, but most was a personal investment by Jean and Marvin Konkle, who founded and operated the auction until Rural Action purchased it in April 2010.

In the world of produce auctions, this was actually pretty affordable; a study of Pennsylvania auctions from 2002 found average startup costs to be around $1.5 million (£910,000).

In general, start-up funding for Ohio auctions has come almost entirely from local people, not from government grants or subsidies. Many Amish and Mennonite farmers are opposed to receiving such funding, Bergefurd explained. Instead, communities fund an auction by selling shares locally. Roughly five years into the life of a typical auction, it starts yielding returns on those shares.

For its first three years, the Chesterhill auction operated at a net loss, but around 2008 and 2009 there was a turn. Growers were making more income from the auction, and people from surrounding areas were starting to flock in twice a week to buy produce or just watch the bidding. Commercial buyers started buying in bulk from the auction, and some vendors purchased produce there to resell at farmers markets and fruit stands.

“This year we grossed $223,000 (£135,000) and we basically cut checks to 130 farmers“, said Tom Redfern, sustainable agriculture coordinator for Rural Action. “Probably 10 of those were the majority of that money.”

The state’s largest, Mount Hope Produce Auction, traded more than $10m (£6m) in produce annually as of 2011. But the area is more densely populated and lies between Cleveland and Columbus — a different world, perhaps, from the rural food desert of Morgan County.

One way Chesterhill has sought to overcome its challenges is by encouraging farmers to collaborate for mutual benefit. Farmers meet before each growing season to strategise, which helps prevent oversaturation of any single item.

The auction has also connected farmers with classes to help them improve their agricultural processes and sell their produce, and has in turn boosted the local food economy. Blackburn is one of hundreds who have attended training sessions conducted by Rural Action in partnership with OSU Extension. The training ensures that farmers know how to clean and prepare produce for direct sale.

A better deal for the producer

In the scheme of the larger Ohio food economy, $40m (£24m) may look like a drop in the bucket. But for many Appalachian farmers, it has meant a real improvement in lifestyle and livelihood.

Paul Linscott is one such farmer. He’s retired and mainly sells black raspberries at the Chesterhill auction in June and July; he doesn’t rely primarily on his auction income. He freezes and cans a lot of his produce, and the auction prevents the excess from going to waste.

Warren Fussner agrees. He’s an Amish farmer who clerks at the Chesterhill auction, inspecting all the food that comes through for quality. “It’s something that, if people want to get involved, there’s an income for any family“, he said.

Fussner lives six miles from the produce auction at Chesterhill; it takes him about an hour to get there by horse and buggy. Before the auction, he said, prices were unstable and sources of income uncertain. Farmers who sold produce directly off their farm could be tricked by dishonest buyers into selling too cheaply.

In part because of their role in stabilising prices, produce auctions throughout the state have helped Amish and Mennonite communities thrive, Bergefurd believes.

That’s especially important because many Amish and Mennonite communities across the state have shut down their dairy operations over the last few decades as a result of new dairy production regulations. The regulations demanded that farmers use technologies, such as mechanical cooling equipment, that these communities often avoid.

In lieu of dairy, many have transitioned to produce. And the auctions seem to have helped these communities thrive economically — many in the next generation who might have had to move away to make a living are able to stay in their tight-knit communities.

Ups and downs for commercial buyers

The volume and variety of produce at the Chesterhill auction impressed Rapposelli enough that he started buying it for Ohio University. And because he was able to communicate his needs to farmers face-to-face, they started growing more of the types of produce he wanted most in the following year.

“They were really responsive“, Rapposelli said.

Today, he supplies his two private restaurants with food from Chesterhill. But buying from a produce auction isn’t exactly easy for a busy business owner.

Getting food from the auction tends to be more time-consuming. Rapposelli used to drive there and spend several hours bidding; afterward, he arranged to transport the food.

So why go to all that effort?

“At the very basic, basic level, it’s because the food’s better,” he said. And secondly, “If you have an opportunity to support a neighbour rather than a corporate entity, you should support the neighbour.”

Today, the situation has much improved for commercial buyers. Rapposelli wasn’t at the auction once for the 2013 season because Fedyski now does proxy bidding for big buyers. He bids for them and often arranges a pickup location for the produce.

It seems to be working well — remote bidding accounted for 10% of sales in 2013, Fedyski said. A hospital also buys from the auction, and Fedyski is working to arrange a collaboration between local schools and a nearby culinary college, in which the college would do the prep work most school cooks don’t have the time for.

The other challenge for a commercial buyer is the unpredictability. You’re not always going to get the product you want for the price you want, Rapposelli explained.

“I always have to have a backup plan“, he said. “It’s one of those things that, once you do it a little bit, it’s really easy.”

A community built around food

What Rapposelli refers to as “real food” is becoming more of an “everyday thing” in Morgan County, according to auction regular Mary VanHorn.

“It’s my garden during the summer“, said VanHorn, who lives just a few miles away. She, like many buyers, freezes enough produce from the auction to last through most of the cold months when the auction isn’t open.

Before the auction opened, she said, there wasn’t a comparable community gathering place anywhere in the county. VanHorn has helped to transform it into a community hub by organizing potlucks about three times a year. The result is a place where “everybody knows everybody else.”

Fedyski agreed that the auction has become a place for people to meet and families to gather. “A lot of families go there together, husbands and wives, and because it’s a communication hub they’ll get there and they’ll split up.

“They’ll end up across the auction floor bidding against each other.”

Erin L McCoy wrote this article for YES! Magazine, a national, non-profit media organization that fuses powerful ideas and practical actions. Erin worked as a newspaper reporter and photographer in Kentucky for almost two years. She is now a Seattle-based freelance writer specialising in education, environment, cultural issues and travel, informed by her time teaching English in Malaysia and other travels. Contact her at elmccoy [at] gmail [dot] com or on Twitter @ErinLMcCoy.