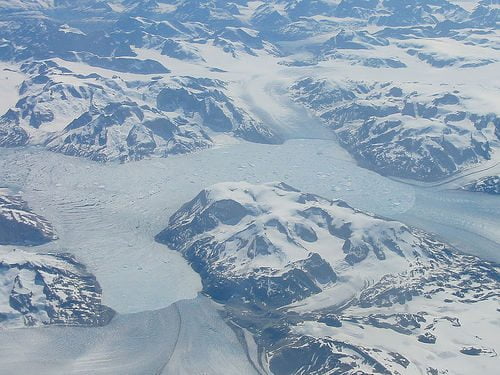 In pictures: The secrets of Greenland’s ice sheet

Diana Ibáñez López takes a look at Greenland’s ice sheets, the secrets they hold and how scientists have unlocked them over decades of research.

Scientists were aghast when in 2006 a lake with 4,000 Olympic swimming pools’ worth of water disappeared into Greenland’s ice sheet in just two hours. In June 2015, after nearly a decade of research, they worked out why it happened: When the lake’s drainage system backs up, the ice sheet cracks all over briefly, evacuating the water to the sea.

A preacher realized 250 years ago that Greenland’s ice was full of secrets — including the key to understanding Earth’s climate history. Ever since, researchers have been fascinated by how the ice sheet shifts, changes and melts.

Three times the size of Texas and over 3 kilometers thick in places, the ice sheet contains enough water to raise the oceans by 6 meters. And as the world warms it is melting faster than ever before. How have researchers explored this Arctic expanse, and what have they discovered there?

Protestant missionary David Cranz became fascinated with ice when he spent a year preaching to Eskimo tribes. It’s not surprising: Greenland, the biggest island in the world, is almost entirely “glazed,” as Cranz put it.

Map of Greenland © US Geological Survey, 1976

Cranz wanted to know how the ice was formed and why it “dissolved” again. His observations of glaciers laid the groundwork for future surveys and early climatologists, who realized that this ancient ice was a logbook for Earth’s climate.

Twelve summers logged in a 19-centimeter section of ice.

Rink’s work caused a splash, giving credence to the theory of Ice Ages at a time when most people attributed changes in the climate to the stars. He sparked a trend in glacier research, and even has one named after him.

The Rink glacier flows from the Inland Ice into Baffin Bay. © NASA

Glaciers are known to move, a bit. Norwegian geologist Amund Helland wanted to know how fast, so he measured the glacier front near the west coast trading town Ilulissat. As it happens, this glacier drains into the world’s fastest ice stream, currently moving 19 meters a day.

In 2004 the Ilulissat Icefjord was declared a UNESCO World Heritage site, but this doesn’t mean it won’t change. The glacier retreats in summer and grows in winter, but since it was first mapped in 1850, it has shrunk by about 40 kilometers.

May 1888—May 1889 – Zoologist crosses ice sheet on skis, proves its existence

Fridtjof Nansen needed a break after handing in his Ph.D. on the nervous system of the hagfish, so he set off to ski across Greenland. Nansen’s trip was the first to cross the Inland Ice, proving that it extended from coast to coast without interruption.

After the crossing, the team, which included local Greenlanders, wintered at a coastal camp. There Nansen studied Inuit culture, inspiring later explorer-ethnographers such as Knud Rasmussen.

A yearlong expedition led by explorer Augustine Courtauld and geologist Lawrence Wager set out to take meteorological readings three times a day and keep track of rainfall. They found plenty to do besides: The team studied the ozone layer, the aurora, the earth’s magnetism…and went on long, rugged walks.

The readings were transmitted back to the UK and included in the weather forecasts. This was also the period ofthe first aerial photography, which opened up the Inland Ice to detailed surveying.

French explorer Paul-Émile Victor also set out to take measurements. The task he set his team was huge: recording the profile of the underside of the Inland Ice, to work out just how massive the ice covering Greenland was.

Paul-Émile had crossed the Inland Ice in 1934.

Ice cores are samples of exceptionally well-preserved sections of the ice sheet that have suffered no melt. The oldest, drilled out of Greenland ice, goes back 123,000 years.

The task the French expedition took on with tanks, parachutes and sketches was completed by the US army using radar that could look through 3 kilometers of ice.

This led to the creation of the first accurate topography beneath the Inland Ice. Radar scans have continued for decades, and in 2013 they revealed the world’s longest canyon hidden beneath the ice.

The 750-km long canyon serves as drainage for the ice sheet. © J. Bamber, University of Bristol

An ice core from deep in the Inland Ice showed that the last time Greenland was completely ice-free was over 2.5 million years ago. This means that the heart of the world’s second-largest ice sheet has been in place since then, despite large variations in climate. It also gives us a better idea of how much warming Greenland can endure before its ice melts completely.

Envisat was launched to monitor the Earth’s atmosphere and measure changes in the oceans, land surface and ice. The data refined the map of Greenland’s ice sheet, showing 6 centimeters of growth per year on the Inland Ice. The coastal regions of the ice, however, continue to melt ever faster.

Envisat image of the coast of Greenland © ESA:AFP-Getty

A NASA scientist saw, in satellite images, that about 40% of Greenland’s ice sheet thawed at the surface. He thought it must be data error, but two other observatories confirmed the melt. Four days later, the Inland Ice was 97% thawed.

On average, half the surface ice melts in a summer. But this speed melt wasn’t entirely unnatural: ice core analysis shows melt events happen in Greenland every 150 years or so. The last one was in 1889, so this one was roughly on schedule.

This ongoing NASA mission aims to survey all of the Earth’s polar ice from the air, then create a 3D model of both the Arctic and Antarctic ice sheets,  including all of their interior layers.

A 3D animation of the operation shows radar penetrating the ice. © NASA

NASA wants to know how the hidden landscape affects ice movement, in order to better understand the interplay between climate and melting.

Equipped with ice-penetrating radar, NASA’s GROVER rover has a mission similar to the 18th-century missionary who became fascinated with ice: to find out how the ice sheet was formed and predict when it might melt.

GROVER is solar-powered, a good pollution-free option in the Arctic summer, where the sun never sets. The rover was based at Summit Station, a popular year-round research camp.

Lakes on the ice sheet have been draining mysteriously fast. First spotted in July 2006, when a 5-square-kilometer lake vanished in two hours, the science behind the phenomenon remained an enigma for years. Scientists feared the water could lubricate the ice sheet: If the whole thing slid into the ocean, it would raise the global sea level by 6 meters and cause catastrophic flooding.

To se what was going on, researchers rigged the ice with GPS. As the lake filled up (and disappeared) again, they discovered a rapid draining system: When the ice sheet’s natural plumbing is at full capacity, water beneath the ice pushes a huge block up. It floats out of place, creating a hydrofracture — multiple cracks under the lake — through which the lake drains at speed.

The cracks close when the block settles back into place, and the lake returns to a normal plumbing rhythm through a single vertical river.

Carbon prices should increase up to 200% to avoid tipping point, says study