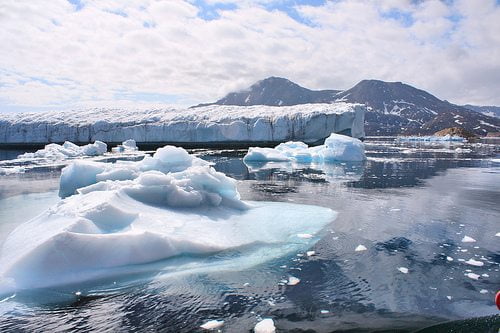 The disappearance of melting ice sheets, caused by global warming, may have a small silver lining, scientists have said. A new study suggests that summer meltwaters carry iron into the oceans, boosting the growth of plankton species that capture carbon – therefore buffering climate change.

Published in the journal Nature Communications, the study is based on measurements from meltwater collected from the Leverett Glacier in Greenland over the summer of 2012.

They found that the samples contained a surprising amount of bioavailable iron, suggesting that polar oceans are topped up with the nutrient each time glaciers melt.

“The Greenland and Antarctic Ice Sheets cover around 10% of global land surface. Iron exported in icebergs from these ice sheets have been recognised as a source of iron to the oceans for some time. Our finding that there is also significant iron discharged in runoff from large ice sheet catchments is new,” explained lead author Jon Hawkings, of the University of Bristol.

It is already well known that increased quantities of bioavailable iron in ocean waters boost plankton populations. In fact, some experts have already controversially suggested artificial iron fertilisation as a form of geoengineering to combat climate change.

Experiments have not produced encouraging results, and in 2009, the Royal Society warned that iron fertilisation has a “high potential for unintended and undesirable ecological side effects“.

However, it seems that ice sheets are already fertilising the seas each summer.

Based on their findings, the researchers estimate that anywhere between 400,000 and 2,500,000 tonnes of iron is released into the sea each year in Greenland, compared to between 60,000 and 100,000 tonnes per year in Antarctica.

The study represents a rare example of good news, but when it comes to the future of the world’s ice sheets the prognosis is overwhelmingly bad.

Earlier this week, a new radar survey revealed that in the past three years Antarctica has lost ice at twice the rate it did between 2005 and 2010, with around 160 billion tonnes melting into the sea each year.

This closely followed the publication of two studies that detailed the grim prospects of the West Antarctic.

Both papers, published last week, warned that the irreversible collapse of the West Antarctic ice sheet has begun, meaning that a potentially devastating eventual sea level rise of up to 4 metres (13ft) is guaranteed.