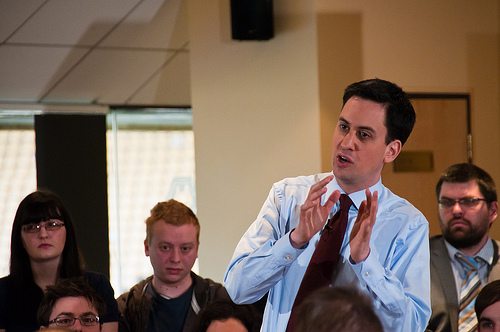 The Labour party has been urged to earn its place in government at the 2015 general election by adopting a bold vision for a “more equal and sustainable society”.

An alliance of 19 individuals from thinktanks and other organisations, including the Fabian Society, the London School of Economics and Opendemocracy, says the economic, social and environmental challenges facing Britain requires a “transformative change in direction”.

In a letter published by the Guardian, the groups argue that inequality, the threat posed by climate change, the “irrelevant” democratic system and the well-documented problems in the financial world demand a Labour or Labour-led administration in 2015.

They add, “But if Labour plays the next election safe, hoping to win on the basis of Tory unpopularity, it will not have earned a mandate for such change.

“It must take into the election a vision of a much more equal and sustainable society and the support of a wider movement if these formidable challenges are to be met.”

The letter follows the publication of two separate studies that outlined the size of the wealth gap in the UK. The first, by the Equality Trust, argued that the social consequences of inequality cost the country over £39 billion each year. The second, by Oxfam, suggested that the five richest families in the UK were wealthier than the bottom 20% of the population, the equivalent of 12.6 million people.

More generally, the calls for Labour to consider sustainability in its manifesto ahead of 2015 appear to chime with a survey by Vote for Policies. If party badges were removed and voters selected the policies they most agreed with, the survey suggested that the Green party would have won the popular vote at the 2010 general election.

The alliance says Labour’s manifesto should be based on five principles, including the accountability of all powerful institutions to all stakeholders and a prevention of the causes of our social, environmental, physical and mental health problems.

The letter concludes, “National government has a continuing strategic role to play but the days of politicians doing things ‘to people’ are over. The era of building the capacity and platforms for people to ‘do things for themselves, together’ is now upon us.

“Working in this way, with others, Labour can help act to fundamentally disrupt power relations and reframe the debate to make a good society both feasible and desirable. It is time people had the power.”