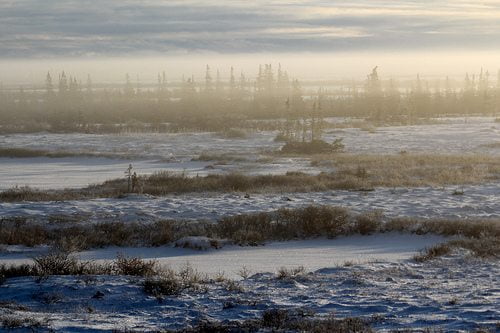 Global warming has finally reached one of the last untouched refuges of the Arctic region, according to new findings.

Researchers from Ontario universities say that the lakes of the Hudson Bay Lowlands in north-east Canada, one of the last areas to hold out against global warming trends, are showing signs of sudden change.

Their study, published in the journal Proceedings of the Royal Society B, notes that the sub-Arctic region had maintained stable, cool temperatures for hundreds of years until the mid-1990s, thanks to sea ice on Hudson Bay – the largest northern inland sea – that naturally cooled the waters.

However, average air temperatures in the area have also risen dramatically – going from around 0C in the mid-1990s to 3C by the end of the 2000s in the shoreline town of Churchill, Manitoba.

By studying long-dead algae from the lakebeds off the Hudson Bay shoreline, the scientists found that the waters have warmed at an extraordinary rate and magnitude over the last two decades.

“Lakes are like a history book of what has happened over time”, explains John Smol, one of the scientists who worked on the study.

Their findings showed the diversity of the algae rapidly expanded, as species that can only survive in warmer water began to appear.

This upheaval, discovered by studying some of Hudson Bay’s smallest organisms, may have a devastating impact on some of its largest. The area is home to the southern-most population of polar bears, and the news that the base of the ecosystem that supports them is fundamentally changing is cause for concern, as is the areas disappearing sea ice. It is also bad news for native fishing communities.

However, the warming of Hudson Bay could have even greater global significance, warns Kathleen Rühland, another author of the study.

“Our findings suggest that ecological tipping points have been crossed and that, sadly, we are witnessing the loss of Arctic ecosystems as we know them. The Hudson Bay Lowlands are the southern-most Arctic region in the world, and therefore on the front lines of rising temperatures”, Rühland writes in an article for the Conversation.

“One of the world’s largest peatland areas, the lowlands are a significant reservoir of the world’s carbon. If global warming were to increase the release of that carbon into the atmosphere, the repercussions would be of worldwide importance.”