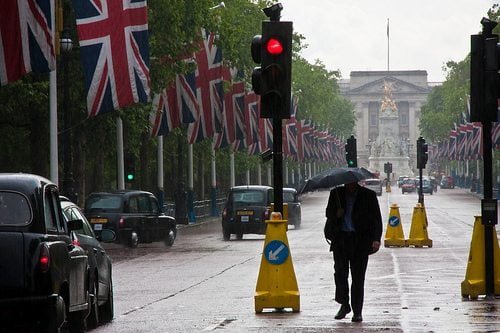 Prolonged storms and heavy rainfall have led to the wettest winter in Britain since records began in 1910, the Met Office has said.

Provisional figures said that 486.8mm of rain fell between December 1 and February 19 – beating the previous record of 485.1mm of rain back in 1995. Wales, East Scotland and Southern England all have new regional records.

The milestone comes despite the winter not being over yet. The Met Office warned that more rain might still fall over the coming weeks, as 61 flood warnings – two of them severe – and 117 less serious flood alerts are still in place. However, it says that elsewhere in the UK, the winter has been warmer than usual.

Commenting on the figures, Friends of the Earth climate campaigner Guy Shrubsole said, “Extreme weather is becoming more common; four out of the UK’s five wettest years on record have taken place since 2000.

“The climate is changing before our eyes, and still the politicians fiddle – the more fossil fuels we burn, the more floods we see. The government needs to close the gaping half-billion pound hole in its flood defence plans and redouble efforts to tackle climate change.”

Over the past few days, the Met Office has said that it was not possible to attribute the flooding crisis to climate change. However, it admitted that an increase in rainfall was likely in a warmer world.

According to a recent poll, almost half of Britons (47%) believe that the recent flood is “probably the result of changing weather patterns due to climate change”, while 39% – mostly Conservative and UKIP voters – disagreed.