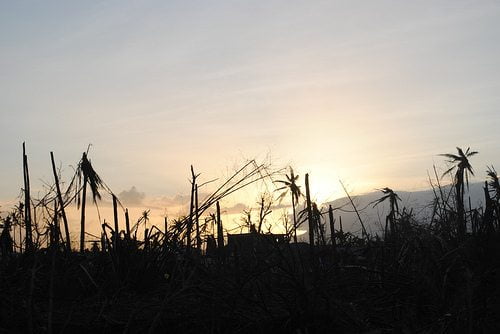 Insured losses caused by damaging weather events in East Asia over the last three decades have totalled $76 billion (£47 billion) as floods and typhoons become more frequent. And costs are set to rise even further, according to one of the world’s leading reinsurers.

Munich Re says that the number of weather-related loss events has increased by more than a factor of four over this period, causing overall economic losses of around $700 billion (£440 billion). Total insured losses amount to less than 10% of this sum, with the majority of insured losses coming from disasters in Japan.

Over 10,000 people are feared to have died while around 800,000 have been displaced, as Typhoon Haiyan, one of the strongest storms to ever make landfall, tore through the Philippines this weekend.

Charles Watson, director of research and development at the disaster-modelling firm Kinetic Analysis Corp, estimates that losses will reach around $12 billion (£ equivalent in brackets) – around 5% of the Philippines economic output.

“A $12 billion storm is not really that bad here in the US. For the Philippine Islands, it is catastrophic”, Watson said.

Ludger Arnoldussen, the Munich Re board member responsible for the Asia-Pacific region, said that Typhoon Haiyan “underlines how important analyses and a deep understanding of these weather phenomena are.”

He added, “Governments and insurers need to develop risk-minimisation strategies in order to reduce the number of victims and losses in the future.”

Meanwhile, Peter Höppe, head of Munich Re’s geo risks research unit, commented, “In the last 10 years, typhoon activity has been below the long-term mean level. Extrapolating these cycles into the future, we expect a phase of higher typhoon activity in the next few years.”

Munich Re warns that, with the exception of Japan, East Asian nations will remain inadequately insured against such natural disasters in the years to come.

Scientists have also warned that global warming will increase the chances of similarly powerful storms forming in the future.

Prof Will Steffen, a researcher at the Australian National University and a member of the Australian Climate Council, explained that hotter and wetter conditions are already affecting storms such as Haiyan.

“Once [cyclones] do form, they get most of their energy from the surface waters of the ocean”, he said.

“We know sea-surface temperatures are warming pretty much around the planet, so that’s a pretty direct influence of climate change on the nature of the storm.”

Earlier studies have also suggested that the frequency of tropical cyclones will decrease as the climate changes, but said that those that do occur will be stronger as a result.