New Inventions that Can Change the World

We are living in a world where population growth is putting a serious strain on the wellbeing of our planet. The last two centuries have seen a mind-boggling sevenfold increase in global population, and with it an exponential growth in our food and energy needs. Pollution, global warming, deforestation and the ever increasing depletion of non-renewable resources are just a few of the major adverse effects of human activity. To preserve our planet and leave a liveable world to future generations, there is a palpable need for a paradigm shift towards sustainability and greener technologies. Luckily, scientists around the world are working tirelessly on ways to lower our carbon footprint, from sustainable energy to green transportation and sustainable farming methods. The following is a list of inventions and technologies that can change the world for the better. 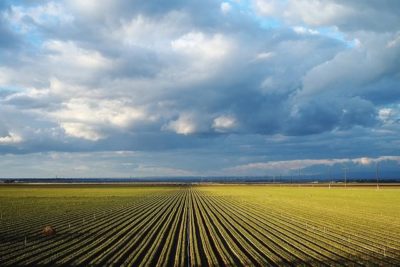 An exponentially growing global population is putting a serious strain on food production, and modern agricultural methods deplete the soil and result in major deforestation. With arable land becoming scarce and food demand rising, vertical farming methods are becoming a viable alternative. The idea is to build upwards, and thus increase food production per unit area. Singapore is investing heavily in vertical farming methods, and already has the world’s first purpose built vertical farm that produces half a ton of vegetables every day. Although these farms have a high initial cost, once they are constructed they require minimum maintenance, and in effect pay for themselves. Vertical farms of the future will be designed to optimise food production, and provide plants with the best possible conditions to grow and thrive. Irrigation and monitoring systems will be automated, and even the light can be controlled so as to only produce specific wavelengths depending on what is being grown. Farming solutions do not have to be ultra-high tech, however. Communities in urban areas are coming together and founding community gardens. New York City plans to reclaim vacant lots for the purposes of urban agriculture, giving people access to locally grown, organic produce.

The invention of the automobile has given people an almost unlimited mobility and the convenience of fast and comfortable transportation. On the other hand, internal combustion engines are responsible for air and soil pollution, as well as the depletion of world oil reserves. The US alone burns nearly 4000 million gallons of gas every single day. In China, the 14 largest cities are responsible for almost half a million cases of respiratory illness per year.

The dream of an electric car is as old as the petroleum powered automobile, but it is only in recent years that it is becoming a reality. Electric cars are rapidly catching up to their gas guzzling cousins, both in performance and affordability. The Tesla Model S, for example, has a range of about 280 mile on a single charge, and a relatively affordable starting price of $50,000. Other manufacturers are incorporating electric engines into their cars, creating petroleum/ electric hybrids. Electric cars, however, still have a ways to go before they become the primary means of transportation. Whilst at-home charging stations are readily available for the owners of electric cars, we are still far from a widespread public infrastructure for charging e-vehicles. This makes long trips difficult, and dissuades car buyers from going electric. 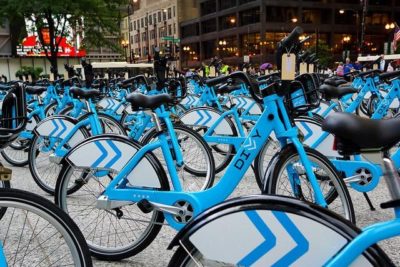 When it comes to getting around town or taking short trips, nothing beats the bicycle in terms of carbon footprint. A bicycle produces no emissions, does not contribute to noise pollution or traffic jams, needs no refilling or charging, and even helps you to stay fit. This has not been lost on the municipal governments of many of the world’s greatest cities. Bike share programs are becoming a widespread and popular means of transportation in the world’s great capitals such as London, Paris and Washington leading the way. The bike share system allows you to check out a bike for a small fee in one part of the city and leave it in another at no charge. Since 2007, the idea has taken off all around the world, with massive programs Asia. Hangzhou in China has an impressive fleet of 65,000 public bikes that have already put a dent in the city’s infamous smog and pollution levels.

The world we live in has rightly been characterised as a “throwaway society”, with the average person producing over 2kg of trash every day. With the average American throwing away roughly 40% of their food, over one hundred cities in the US have launched composting programs in an attempt to lighten the load of bulging landfills. San Francisco implemented its visionary curb-side composting program fifteen years ago. With over 600 tons of compost collected daily, Frisco is amongst the most eco conscious cities in the world. According to the EPA, of the 250 million tons of trash created in America, 34 percent goes into recycling or composting programs.

Organic trash is just the tip of the iceberg, as rapid technological progress is making electronic devices obsolete in an ever shorter timeframe. To combat technological pollution, many cities are implementing eco ATMs, where you can deposit your old phone and get some money for it. By doing so, you are ensuring that rare and precious metals that are present in every mobile device are recycled and repurposed without polluting the landscape.

While human activity has, and continues to do harm to the planet, there are many inventions and technologies that can help us to lower our carbon footprint and preserve the environment. With the support of governments and the population at large, many projects have already proved to be both eco-friendly and economically efficient. While non-renewable energy sources and wasteful practices are still the norm in most of the world, there is a palpable shift in consciousness towards the renewable and sustainable.