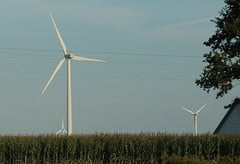 Ofgem, the energy regulator, has hinted that it will approve investment plans for renewable energy projects in Scotland to be connected to the UK grid. Alex Blackburne looks into yet another encouraging story coming out of the Northern most segment of Britain.

As the UK continues to fumble around its renewable energy agenda – namely through such controversial, much-discussed policies as the Green Deal and the feed-in tariff scheme – Scotland is quietly making a name for itself in the green world.

Following its pledge to become 100% renewable by 2020 – no mean feat, by the way – the country looks set to receive the approval of Ofgem for its existing wind turbine fleet to be linked up to the UK grid.

The deal, worth £7.6 billion, has been tabled by energy companies Scottish Power and SSE, and although a final decision won’t be made until April, early signs suggest Ofgem will approve plans.

The energy regulator said that the announcement will “[deliver] essential upgrades to Scotland’s transmission network at the lowest cost to consumers”, and estimates that an extra 35p a year will be added to consumers’ bills between 2013 and 2021.

The news has been met with excitement and appreciation by industry officials in Scotland.

Catherine Birkbeck, grid and markets policy manager at Scottish Renewables, the country’s leading green energy trade association, said, “These new proposals by Ofgem means Scotland’s electricity generated from renewable sources such as onshore wind will reach more homes and businesses across the country than ever before.

“It is especially important for the north east of Scotland and the islands where we have so much of our natural resource in wind and marine energy.

“Commitment from Ofgem to invest in new grid connections will also attract inward investment in Scotland, but only if the cost for generators to connect to the network is not prohibitively high.”

Francis Stuart, parliamentary officer at Friends of the Earth Scotland, likewise agreed that investment in renewables was incredibly important.

However, he also said, “This investment will only be properly realised if the accompanying charging regime is made fit for purpose.

“The current system discourages renewable investors from taking forward projects in Scotland as costs are higher than elsewhere in the UK.”

Ofgem’s current review of the charging arrangements for energy transmission networks, called Project TransmiT, is likely to reduce the costs for grid connection for renewable projects.

Stuart said that this only applies for the mainland, though, and that renewable electricity generation on the Scottish islands will be “up to seven times more expensive”.

With regards to Project TransmiT, he said, “The review was designed to ensure that the transmission charging framework was supporting the transition to a low carbon economy.

“While it is a step in the right direction, unless the wind, wave and tidal potential of Scotland’s islands are realised, it will be a missed opportunity.”

Scotland has already begun experimenting with its magnificent renewable capabilities, after its Government announced plans to build a massive, two-bladed wind turbine off the coast of Methil in Fife.

This CGI video, produced for the Scottish Low Carbon Investment Conference, provides a visual insight as to what the country could well look like in the not-too-distant future, if its innovation in renewable technologies continues.

As always, widespread investment in clean technologies, starting on your very own doorstep, is the key to achieving every target and realising every promise.

To find out how you can get involved, ask your financial adviser. Don’t have one? Then fill in our online form [LINK] and we can set you on the right track to start making your money make a difference.