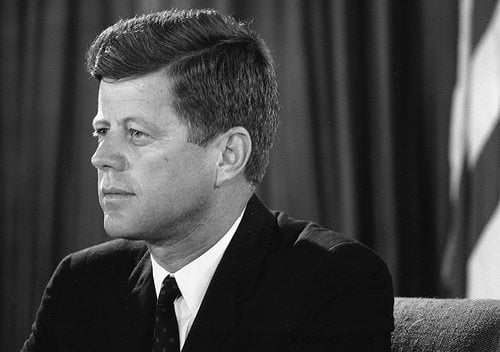 Fifty-two years ago today, US president John F Kennedy announced at the 1961 United Nations General Assembly a proposition to implement schemes that could effectively predict and control global weather patterns.

His position was a united front: “We shall propose further cooperative efforts between all nations in weather prediction and eventually weather control.”

The techniques he was proposing had in fact already begun, for in April of the previous year the solar powered TIROS satellite was launched into orbit from Cape Canaveral on a mission to relay back images of cloud formations. The voyage was reported as a great success and an innovation that “opens up new vistas for weather forecasting and control”.

In this sense, the term ‘control’ is referred to as a step toward benefitting mankind by discovering methods to lessen the effects of natural disasters or improve the stability of economic sectors that are heavily influenced by weather.

The advancements in weather forecasting and prediction are common place in everyday life and are often for granted. However, the concept of weather manipulation and control is an almost unknown subject. As such, there is a very limited knowledge of the extent of geoengineering projects that have been employed in our atmosphere.

Projects such as ‘cloud seeding’ are among the most commonly admitted to, for the effort to either intensify or nullify precipitation in areas of drought or flood by the spraying of silver iodide has the potential to be used for a great amount of good. However the unknown side of asserting influence on the weather extends far beyond the realms of rainfall and has always been ordained to have military applications.

In 1958, before Kennedy’s speech, the US military announced success in weather modification by sending powerful electromagnetic beams into the upper atmosphere, using ionospheric heaters similar to the ones used at the HAARP instillation. The facility defines itself as “a scientific endeavour aimed at studying the properties and behaviour of the ionosphere, with particular emphasis on being able to understand and use it to enhance communications and surveillance systems for both civilian and defence purposes.”

The HAARP technology has enormous capabilities for weather manipulation and its development was not prevented by the 1976 UN Weather Weapons Treaty – the Convention on the prohibition of military or any other hostile use of environmental modification techniques. This defined weather weapons as “environmental modification techniques”, encompassing “any technique for changing – through the deliberate manipulation or natural processes – the dynamics, composition or structure of the Earth.”

This treaty prohibited the hostile use of modification; however provisions were made if the applications are for “peaceful purposes”. The 1996 USAF document, Owning the weather in 2025, promises are made that “weather-modification can provide battle-pace dominance to a degree never before imagined” – a comment that could be directed towards the ionospheric heating facility, HAARP.

Even the beneficial cloud seeding has been used by the military, though. In Vietnam, ‘Project Popeye‘ was a weather modifying operation to cause constant rain in an effort to turn all roads into flooded water ways. It was finally admitted by the US Air Force that 2,600 cloud seeding flights were made during the manoeuvre.

HAMP (Hurricane Aerosol Micro-Physics) has attempted “to test the effects of aerosols on the structure and intensity of hurricanes” to better understand and predict hurricanes in an effort to diminish their power before they make landfall.

In a paper entitled Aerosol Effects and Microstructure on the Intensity of Tropical Cyclones, included in the July 2012 Bulletin of the American Meteorological Society, the authors concluded, “We recommend that hurricane reconnaissance and research airplanes are equipped with aerosol and cloud physics instruments and fly patterns that will allow such measurements.”

Also in HAMP’s final report, the authors said, “The effects of aerosols should be taken into account in the prediction of TC intensity”, and, “The HAMP hypothesis that the introduction of small aerosol particles into the clouds act as CCN [cloud condensation nuclei] and can weaken the storm intensity is supported.”

The realistic outcome of climate change is a rise in frequency in more extreme weather patterns, as increased water temperatures give an enhanced injection of energy, culminating in more violent storms. Hurricane Sandy is an example of such; described at the worst storm in 100 years and suggested by conspiracy theorists to ‘coincidentally’ coincide with Barack Obama’s election win. Could it have been the result of weather control or exacerbated by our influence on the climate?

Weather manipulation is a largely unregulated practice and even though conspiracy stories about manmade freak weather events are abound, evidence for such experiments is highly contested. The true limits and effects of man’s control of our unpredictable weather system are as yet unknown.

Jamie Mitchell is originally from Cambridge and studied English at the University of Lincoln. He graduated with a upper second class honours degree in 2013. His interests include renewable energy, climate change and sustainable living.