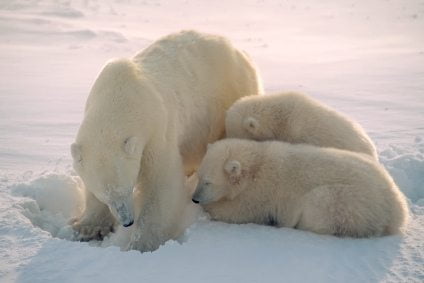 Polar bears are changing diet because of global warming – study

Researchers in Norway have spotted a polar bear eating a dolphin for the first time and have suggested that climate change is pushing the species further north in the Arctic region.

Effects of warmer climate is making polar bears adapting to other preys that are not usually hunted, according to scientists in Norway, who published their findings in a new study.

They argued that a warmer climate in the region had pushed dolphins further north, where they got trapped in winter ice. Polar bears would then easily caught the animals as they surfaced to breathe.

“It is likely that new species are appearing in the diet of polar bears due to climate change because new species are finding their way north”, said Jon Aars from the Norwegian Polar Institute, who shot the picture of a bear eating the dolphin.

Aars added the bear then covered a second dolphin with snow, something never seen before, arguably to store the food.

“We think that he tried to cover the dolphin in snow in the hope that other bears, foxes or birds would have less of a chance of finding it. Maybe to be able to eat it a day or two later, once he had digested the first one”, he said.

“I don’t think that this signifies a great upheaval in the diet of the carnivores. It’s just that the polar bear is coming into contact with species they have not been used to meeting until now.”

Climate change has been linked to a dramatic loss of ice in the Arctic region, where the landscape is changing and greening as a result of warmer temperatures, which are affecting several wildlife species.