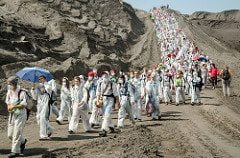 Almost two weeks of demonstrations against fossil fuels use have come to an end. The actions took place over six continents and the protest made a significant stand, posing a serious threat to the future of the fossil fuel industry which has already been weakened by financial and political uncertainty.

Twelve days of worldwide actions from NGOs, local organisations and communities against fossil fuels have just concluded, showing that the climate movement will not rest until all coal, oil and gas is kept in the ground.

Bill McKibben, Co-Founder of 350.org, said: “This is the hottest year we’ve ever measured, and so it is remarkably comforting to see people rising up at every point of the compass to insist on change.”

Tens of thousands of activists took to the streets, occupied mines, blocked rail lines, linked arms, paddled in kayaks and held community meetings in 13 countries, pushing the boundaries of conventional protest to find new ways to demand coal, oil and gas stay in the ground.

Yeb Saño, Executive Director of Greenpeace Southeast Asia, said: “In our fight against fossil fuels, Southeast Asia is a major battleground and we cannot afford to cede to those who think of nothing but profit instead of people, and plunder instead of protecting the environment.

“As our communities rise against this addiction to coal, we hope to inspire massive civil participation all over the planet. Break Free is a breath of hope for all communities who are standing up to the fossil fuel industry’s relentless expansion despite climate change.”

Driving this unprecedented wave of demonstrations is the sudden and dramatic acceleration in the warming of the planet, with every single month of 2016 shattering heat records – combined with the growing gap between world governments’ stated climate ambitions, and their demonstrated actions in approving new fossil fuel projects.

On the last day of mobilisation, a key monitoring site on Tasmania, Australia, recorded atmospheric carbon-dioxide exceeding 400 parts per million for the first time ever.

As the impacts of a warming planet become more visible in the form of rising sea levels, drought and stronger storms, the citizens who joined Break Free will continue to be a part of the next phase of the movement as it becomes more vocal, disruptive and powerful.