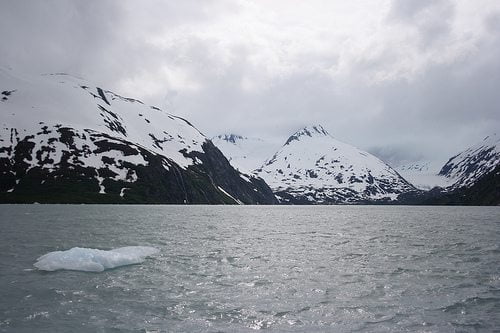 The shallow icy lakes of Alaska’s Arctic plains are melting earlier than usual each year, a new study has found. It suggests that land ice is following the same pattern as the disappearing sea ice in the region.

The study, which used 20 years’ worth of satellite data, also found that the lakes are freezing less in the winter.

“This is another piece in the puzzle of climate change in the region”, study author Dr Cristina Surdu from the University of Waterloo told the BBC.

“We’re seeing warmer air temperatures; we’re seeing sea-ice extent decreasing; and we’re seeing a general greening of the Arctic with the treeline moving north. The lakes are part of that story.”

The study focused on more than 400 lakes near Barrow, the largest settlement on Alaska’s North Slope. The lakes usually remain ice-free over summer while icing over in the autumn.

However, though many of the lakes are no deeper than 1.5 metres, the researchers found that many were not freezing through to the bottom in winter. They were remaining open for longer than was normal in the past.

From 1991 to 2011, the presence of grounded ice by the end of April had declined by 22%. The scientists say this is equivalent to the lakes’ ice caps being reduced in thickness by 18-22cm, while the ice season is now about 24 days shorter than it was in 1950.

“When we saw the actual numbers we were shocked at how dramatic the change has been”, Surdu said.

The researchers conclude this is almost certainly due in part to rising air temperatures in the region. The mean air temperature in Barrow increased by 1.7C in the last decade.

Surdu added that snowfall was also a major factor.

“But what we’re actually seeing is more snowfall at the beginning of the ice season and so the precipitation is working against the ice.”

It is thought that the shortened winter conditions will cause difficulties for local communities who transport goods over the ice roads.

The report warns that the changing state of the lakes could trigger climate feedbacks by disturbing the permafrost under the lakebeds and releasing more heat into the atmosphere in autumn, causing further melting.

Last October saw temperatures across Alaska rise “decidedly above normal both across the state, and throughout the month.”

The monthly mean temperature was a “very significant” 7.4F (4.1C) above the normal 32.4F (0.2C) temperature recorded in the area. The Alaska Climate Research Centre said that this was an “astounding departure” for an area as large as the state of Alaska.