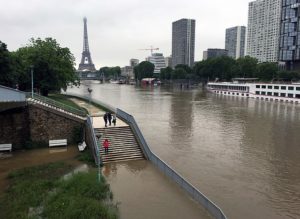 At the end of May parts of France were hit with days of heavy downpours, causing significant damage and flooding. Scientists at the World Weather Attribution (WWA) have now suggested that human-caused climate change is one of the main reasons for the three-day rainstorm. The scientists analysed observational data and used climate change models to determine the causes of the extreme weather.

“We know that global warming leads to more downpours in general,” said Robert Vautard, a senior scientist with France’s Laboratory for Climate and Environment Sciences and Institut Pierre-Simon Laplace. “But with this attribution analysis, we found we could tie global warming directly to the recent rainstorms in France that triggered so much flooding and destruction.”

Overall, the probability of three-day extreme rainfall in this season has increased by at least 40 percent in France, with the best estimate about 80 percent on the Seine and about 90 percent on the Loire. All four climate models that simulated the statistical properties of the extremes are in good overall agreement. WWA scientists also ran analyses for Germany, but the results there were inconclusive.

Vautard worked with Florence Habets — a colleague from the Institut Pierre-Simon Laplace and fellow WWA scientists from the University of Oxford, the Royal Netherlands Meteorological Institute (KNMI), the Red Cross Red Crescent Climate Centre and Climate Central, using observational data and climate models to conduct near real-time analyses of the likelihood that climate change contributed to the recent heavy rains in France and Germany. By reviewing the on-the-ground impacts, the team realized it needed to define the meteorological event differently in France and Germany. In France, the event was best characterized by looking at three-day rainfall extremes from April to June over the Seine and Loire River basins. In Germany, the team analysed trends in one-day maximum precipitation over the hardest hit area (a region stretching from 48°-51°N and 7°-13°E) from January to June.

“Using an ensemble of different climate models and different methods we got very consistent numbers for the impact of climate change on the rainfall in France, giving us confidence in the results,” said Geert Jan van Oldenborgh, a researcher with KNMI who led the analysis. “For such late-spring thunderstorms in Germany this was not the case, so we’re holding off on drawing conclusions for those events at this stage.”

In one location in Southern Germany, walls of water crushed cars and houses, sending residents searching for the safety of rooftops. In parts of central and north-eastern France, historic flooding of rivers led to widespread power outages and the closing of Parisian landmarks like the Louvre museum. The deluge is reported to have killed at least 18 people in Germany, France, Romania and Belgium.

Maarten van Aalst, the director of the Red Cross Red Crescent Climate Centre, added: “These latest lethal floods in Europe illustrate the rising impact of extreme-weather events, including developed and well-prepared countries like Germany and France. Sadly we saw that even advanced infrastructure and water management cannot prevent some areas and neighbourhoods being overwhelmed and people sometimes dying. And hardware goes hand-in-hand with awareness: well-briefed citizens know what to do when intense rainfall and thunderstorms are forecast, and they can get out of harm’s way.

“People affected by extreme events need an objective assessment of the causes,” said Heidi Cullen of Climate Central. “There is often speculation about the possible role of climate change when extreme weather events take place, generally lacking sound scientific evidence. Our goal is to provide quantitative answers using multiple peer-reviewed methodologies so we can let the science speak for itself.”

Richard Black, Director of the Energy and Climate Intelligence Unit (ECIU), said: “The ability to analyse scientifically whether man-made climate change has played a role in specific extreme weather events is advancing at a startling pace. Until very recently, scientists weren’t able to make this sort of judgement, but that’s changing fast.

“Within the last year or so we’ve learned that climate change made both last year’s European heatwave and last December’s extreme rainfall in parts of the UK more likely; and now scientists conclude man-made climate change probably almost doubled the likelihood of the recent French floods.

“This kind of information is really useful. It helps civil authorities plan for increasing extreme weather events of the future, and shows policymakers the increased risks that lie ahead if they choose not to curtail greenhouse gas emissions.”

A scientific paper detailing the results for France and Germany analyses has been prepared and will be submitted to the journal HESS. A non-technical summary of the extreme rainfall analyses may be found on the WWA website.