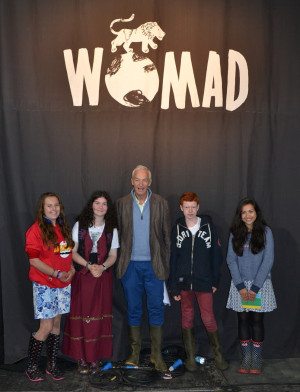 Search is on for Britain’s greenest youngsters

Ecotricity, the world’s first green energy company, has today launched a competition to find the greenest youngsters in Britain, with the four winners taking the stage at this summer’s WOMAD Festival to present their ideas.

Ecotricity, who will host a stage at the festival, is asking school pupils aged 11-16 to send in their ideas about how to achieve a Green Britain.

The competition will focus on the three areas that make up 80% of our emissions in Britain – Energy, Transport and Food – as well as ‘making room for Nature’.

The youngsters will be supported by well-known or expert mentors to help refine their ideas, before delivering a speech during the Young Green Briton Chat at WOMAD.

Last year’s winners included Findlay Wilde, a 14 year old conservationist who was mentored by wildlife presenter Simon King – Findlay has since appeared in BBC Wildlife Magazine’s Wildlife Power List, been interviewed on Springwatch and Newsround, and worked with the RSPB on their Hen Harrier campaign.

Findlay Wilde said: “It’s hard to put into words just what a great opportunity and experience the Young Green Briton Chat was. To have the chance to meet such important people from the conservation world was fantastic, but to be able to share my thoughts and feelings with such a massive audience was really something else. It’s not every day you get to reach out to so many people.

“The relationship I have formed with Ecotricity since the competition has been amazing. We are working together to protect Hen Harriers, they are supporting my campaign work and I really want to help them with the awareness for the Young Green Briton debate. If you feel strongly about protecting our environment, my best advice would be get involved, grasp this opportunity and let our generation’s voice be heard.”

This is the second year of the Young Briton Chat and will be the fourth year that Ecotricity has been at WOMAD, the internationally established world music festival, which this year runs from 28-31 July at Charlton Park in Malmesbury.

“It’s a real encouragement to hear these voices of the up and coming generation, so focussed on sustainability and the idea of a Green Britain. This will be our second year of the competition and we’re looking forward to lots of great new entries, some new mentors and the involvement of some of last year’s winners.”

About the Young Green Briton competition:

• Young people aged 11 – 16 can enter the competition by sending a video, written article or a recording to explain their ideas on how Britain could be greener.

• Their submission should focus on one of the four categories of Energy, Transport, Food and Nature and also consider what is needed to encourage and inspire others to adopt their ideas across schools, the local community and around the world.

• Each of the four winning pupils will meet their ‘Green Britain mentor’ at the festival and receive a mentoring session, before taking the stage to put their points across.

• Entries should be sent to younggreenbriton@ecotricity.co.uk and must make it clear in the subject line which of the four categories is being entered.

• All entries will be acknowledged and must be submitted by 1 June. Ecotricity will select three finalists in each category and each mentor will select the overall winner, per category, by 30 June, when winners will be informed.

• The four winners will receive a weekend pass for themselves and two adults to ‘WOMAD 2016’ (including camping and backstage entry into the Artists’ Village), as well as an Ecotricity goody bag and a personal meeting with their Green Britain mentor.

• Permission must be obtained from a parent or guardian and terms and conditions apply.