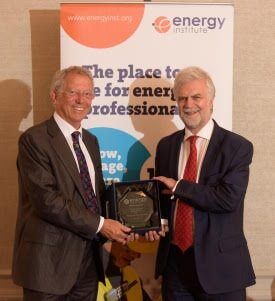 Sir David King FRS HonFEI, Foreign Secretary’s Special Representative for Climate Change, addressed over 230 professionals in his lecture as this year’s recipient of the Energy Insitute (EI) Melchett Award. At the London event Sir David King told attendees that using clean energy in innovative and pioneering ways is key in the battle against climate change.

Addressing more than 230 energy professionals in London, Sir David outlined the UK’s current commitments regarding energy and climate change legislation. He reiterated the long-term goal, as stated in the COP21 agreement, to hold the increase in global average temperatures to well below a 2°C increase above pre-industrial levels and to pursue efforts to limit the temperature increase to 1.5 °C above pre-industrial levels.

He described the low-carbon transition as the ‘greatest opportunity of our age’, highlighting the economic benefits of the transition to a low-carbon economy. In 2014, more renewable energy was installed worldwide than fossil fuel. And in the UK this activity generated £46.2 billion turnover and employed 238,500 workers during 2014.

Having been appointed as Chief Scientific Advisor to the UK Government in 2000, one of his first actions was to initiate a report, engaging 120 scientific, engineering and social science experts, to analyse the risks of climate change, and make proposals for action to manage these risks. Following this, an all-party agreement was formed and has remained the axis of the UK Government’s action on climate change.

In 2013, Sir David was invited back into Government as the Foreign Secretary’s Special Representative on Climate Change. In this role, he developed the Global Apollo Programme – later renamed Mission Innovation and launched on the first day of COP21 in Paris last December.

At this year’s EI Melchett Lecture, Sir David spoke of the achievements of Mission Innovation to date. He said, ‘Twenty nations have joined Mission Innovation, all of which have committed to doubling clean energy research, development and demonstration (RD&D) spend by 2020. This amounts to an annual spend of $30bn.’

In support of economic growth, energy access and security, and an urgent and lasting response to global climate change, Mission Innovation aims to accelerate the pace of clean energy innovation. This will be key in achieving performance breakthroughs and cost reduction to provide affordable and reliable clean energy solutions that will revolutionise world energy systems.

Sir David King is a physical chemist who worked at the University of Cambridge in surface science and catalysis. He was appointed as the Foreign Secretary’s Special Representative for Climate Change in September 2013, having previously served the Government as Chief Scientific Adviser between 2000 and 2007. Other former roles include Chair of Future Cities Catapult, Chancellor of the University of Liverpool, Founding Director of the Smith School of Enterprise and the Environment at Oxford University, Senior Scientific Adviser to UBS, and Adviser to President Kagame of Rwanda. Sir David has published over 500 papers on surface science and heterogeneous catalysis, and on science and policy.

The EI Melchett Award is named after one of the first EI Presidents, The Rt Hon Sir Alfred Mond, later to become Lord Melchett and Chairman of ICI. This honour is made to individuals for outstanding work, whether in research, administration, construction or other professional activity, involving the scientific preparation or use of energy.