No we don’t have a crystal ball, but playing out the Pool, Quarter Final, Semi Final stages, the eventual Rugby World Cup final, based on lowest carbon emissions per capita*, would be between Tonga and Namibia.

As twenty nations prepare to compete in the Rugby World Cup we take a look at the contribution each nation makes to carbon emissions. We reported previously, the real tournament is working closely with the United Nations World Food Programme as part of their Tackle Hunger campaign. An EY economic impact study revealed that the Rugby World Cup is set to deliver nearly £1 billion of additive value into the UK economy and 41,000 jobs.

Rugby giants and previous World Cup winners England, Australia, South Africa and New Zealand would be knocked out in the first round due to their carbon emissions per head. The United States and Canada bookmark Australia as the three highest emitting nations per head.

Of the Six Nations only France and Scotland squeeze through to the quarter finals, and then only just, taking second places in their pool stage. England, Ireland, Wales and Italy bring up the rear in each group.

The Pacific Island Nations do well into the Semi-Finals, with Tonga facing off against Samoa, but Namibia pushes out Fiji in the Quarter Final.

Tonga is the eventual carbon emissions per capita Rugby World Cup winner. It’s ironic that of World Cup participants, these beautiful island nations are the least responsible for the climate change that threatens them most. 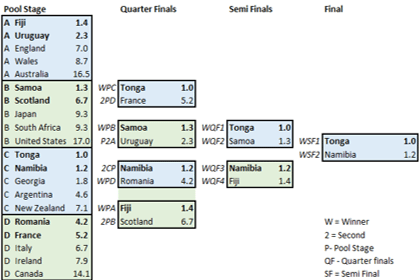