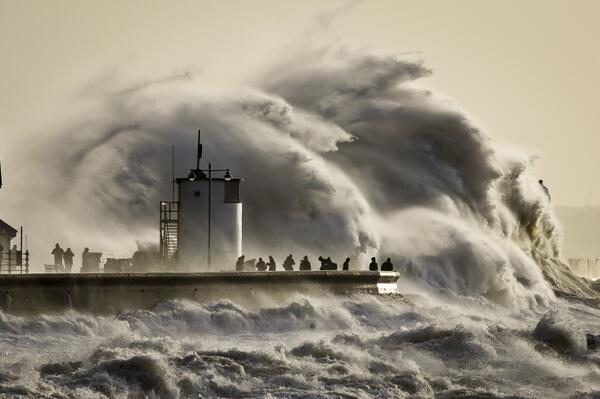 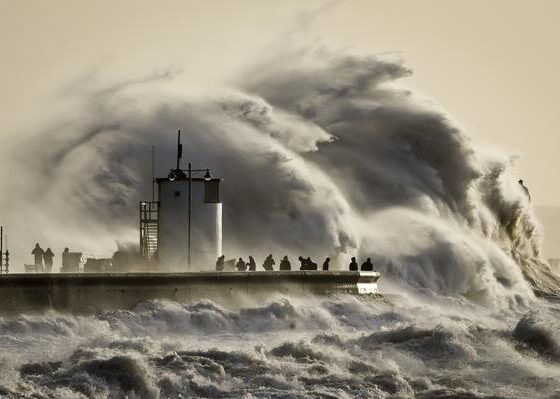 Experts have warned that the UK must prepare for more flooding and gale-force winds in the coming years, as climate change continues to make extreme weather more likely.

Winds of up to 70mph are forecast to hit the west coast of Britain, south-east England and the east coast of Northern Ireland over the next few days. The Environment Agency has issued 104 flood warnings, meaning “flooding is expected“, for areas across the UK.

One severe flood warning – and therefore a danger to life – is in place at Lower Stour in Dorset.

The Met Office says “exceptionally large” waves are expected to reach the UK, as a depression in the Atlantic Ocean is “whipping up” the waters, bringing with them a risk of further coastal flooding.

BBC weather forecaster John Hammond said the waves would be “absolutely lethal if you get in the way of them“.

As many people head back to work after the festive break, travel by road and rail is being disrupted, with some train services unable to run.

This latest bad news follows the worst floods to affect the UK for decades after extreme conditions, beginning over the Christmas period, left thousands without power and caused severe travel disruption.

Veteran meteorologist Michael Fish has said that he is “convinced” that floods, hurricanes and increasingly extreme weather across the world are being worsened by climate change.

“One such event you can’t pin on global warming or climate change. Speaking personally… I do think there’s a connection”, he told Channel 4 news.

“We’ve had this record area of low pressure in the Atlantic, a record typhoon in the Philippines, a heatwave in Australia where temperatures were about 50C and floods in north-east India. We’re getting more and more of these extreme events as time goes on, and I’m convinced, although that is not the official [Met Office] line.”

Meanwhile, Sir David King, the government’s special representative for climate change, argued that the UK must prepare for more of the same as climate change takes hold.

“The important thing to get across is the simple notion that storms and severe weather conditions that we might have expected to occur once in 100 years, say, in the past may now be happening more frequently”, he told BBC Radio 5 Live.

“And the reason is – as predicted by scientists – that the climate is changing and as the climate changes we can anticipate quite a radical change in weather conditions.”

King pointed to a report he wrote in 2004 that predicted that a sea-level rise, increased storm surges and increased intensity of rainfall would cause flooding in previously unaffected inland areas, causing billions of pounds worth of damage.

The Environment Agency estimates then that for every pound invested in flood defences, the country would save about £7 or £8 in flood damage, he added.

However, the current government has faced criticism for enforcing severe budget cuts on the agency, meaning Britain’s ability to manage future floods may be disadvantaged.

“If we really want to manage this problem, and I’m sure that all of us do, we will have to do two things”, King said.

“One, get back to the higher investment level in flood defences and, two, push hard on the rest of the world in terms of mitigating the impacts of climate change.”

In the wake of the recent floods, the environment secretary Owen Paterson’s acceptance of climate science has been brought into question. Labour argued his alleged mistrust of the evidence was affecting the planned budget cuts in the environmental space.

“The question is whether Owen Paterson’s climate change scepticism — remember, he said that Britain would benefit from climate change — has blinded him to concerns of increasing risk of flooding, and therefore he hasn’t protected budgets like he might”, the shadow environment secretary Maria Eagle said.

Paterson convened a meeting on Monday of the government’s emergency committee Cobra to discuss the UK’s response to the flooding.