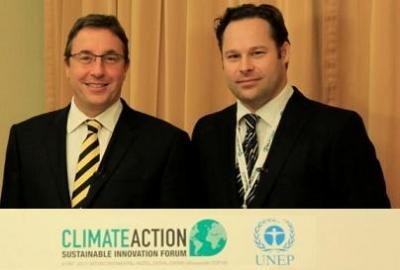 UNEP and Climate Action extend partnership ahead of 2015 climate talks

The United Nations Environment Programme (UNEP) and Climate Action have renewed their long-standing partnership for two years, to continue their efforts to encourage investment in solutions to climate change.

For the last seven years, the London-based Climate Action has worked with UNEP to build cooperation between the public and private sectors in tackling climate change.

By extending this contract beyond 2015, the two organisations hope they can build momentum ahead of next year’s crucial UN negotiations in Paris.

It is hoped that world leaders will agree on strong commitments to cut greenhouse gas emissions at the UNFCCC Climate Change Conference, in order to limit global warming below the agreed threshold of 2C from pre-industrial times.

However, the previous conference, held in Copenhagen in 2009, was widely regarded as a failure.

Experts have warned of the need to build cross-sector support and ramp up the pressure on politicians to ensure the 2015 conference is more fruitful.

Commenting after the announcement Nick Henry, managing director of Climate Action said, “Since we began this journey in 2007, the unique partnership that UNEP and Climate Action share has enabled a great deal of progression.

“With 2015 on the horizon, we look forward to continuing to assist in the incredible climate challenge our world faces, shoulder to shoulder with UNEP.”

UNEP executive director Achim Steiner added, “I would like to commend [Climate Action] for the value added to UNEP’s work and particularly in enhancing private public partnerships.”

The two groups will also host the Sustainable Innovation Forum 2014 in December.

The forum will invite world leaders, CEOs, investors and industry experts to Lima to promote the causes of climate change mitigation and adaptation.

“It’s vital that all stakeholders are part of the conversation and working together towards climate change mitigation and adaptation.”