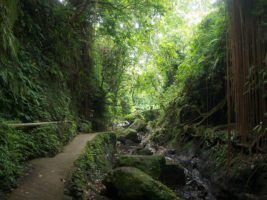 Tropical timber derived from old-growth tropical forests which is widely recognised as a renewable natural resource, is selectively logged worldwide at an unparalleled scale.

But research from the University of East Anglia reveals that these sources of timber are far from sustainable or entirely environmentally friendly.

A study published today in PLoS ONE reveals that once prime tropical hardwoods – such as Brazilian cedars, ipe (Brazilian walnut), and rosewood – have been logged, they do not grow back to commercial levels and are at risk from disappearing altogether.

Lead author Dr Vanessa Richardson, from UEA’s School of Environmental Sciences, said: “Slow growing and commercially valuable species of all kinds have been overexploited over the course of human history – just look at the whaling industry or fisheries.

“Yet many tropical timber species are still thought of as a renewable resource. We are only beginning to see over-exploitation parallels in tree species.

Our research shows that many high-value timber species are logged until their populations collapse altogether.

The research team studied 824 forest sites scattered throughout the 124 million hectare Brazilian state of Pará. They analysed data from legal logging operations that harvested approximately 17.3 million cubic meters of timber across 314 tree species in the state of Pará.

Timber harvests in Pará equate to almost half of all native forest roundlog production in Brazilian Amazonia – the largest old-growth tropical timber reserve controlled by any country. Brazil accounts for 85 per cent of all native neotropical forest roundlog production. They found that loggers can no longer depend on areas where high-value species were formerly abundant, to fetch high economic returns.

This means that logging operations are continuously forced to extract timber trees from new areas of unlogged primary forests.

Prof Carlos Peres, an author on the study from UEA’s School of Environmental Sciences, said: “Our analysis shows that even so-called ‘reduced-impact logging’ in tropical forests can rarely be defined as sustainable in terms of forest composition and dynamics in the aftermath of logging – never mind the greater susceptibility of logged forests to catastrophic fires.

“Environmental licensing and market certification of logging concessions need to take this into account, and review minimum preconditions in terms of volumetric quotas of roundlogs harvested per species and regeneration standards over multi-decade logging cycles.”

“Our study adds a Neotropical body of evidence to support this. We can already see a market shift, in which loggers in old depleted logging Amazonian frontiers are forced to depend on fast growing, soft-wood timber species.”

‘Temporal decay in timber species composition and value in Amazonian logging concessions’ is published in the journal PLOS ONE on July 13, 2016.

This research was funded by the Natural Environment Research Council (NERC).