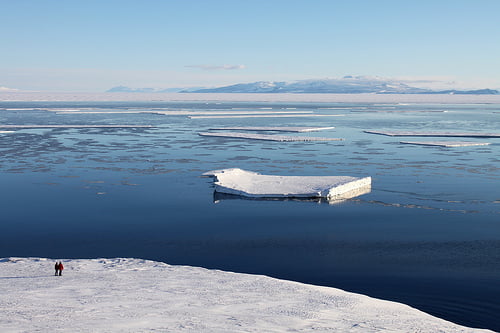 A mind-boggling 4.5 trillion tonnes of the Earth’s ice has now melted according to a study conducted by NASA earlier this year. Now, a new study by the British Antarctic Survey has revealed that ice melt in Antarctica could be driven by warm ocean currents below the icy surface.

Several studies conducted around climate change have revealed that the earth’s ice is melting at a faster rate than first expected. The Antarctic is no exception and scientists from the British Antarctic Survey have been using new techniques to distinguish the differences between the two known causes of melting ice shelves; warm ocean currents beneath and warm air from above.

Scientists took 4.5 million measurements using a laser mounted on NASA’s ICESat satellite between 2003 and 2008 to map the changing thickness of almost all the floating ice shelves. Of the 54 ice shelves measured, 20 are being melted by warm ocean currents, mostly situated in West Antarctica. Further research has shown that on the eastern Antarctic Peninsula, the ice melt can be explained by the warmer summer winds effect on the surface snow.

Dr Hamish Pritchard from the British Antarctic Survey, which is funded by the UK’s Natural Environment Research Council (NERC), said, “We’ve looked all around the Antarctic coast and we see a clear pattern: in all cases where ice shelves are being melted by the ocean, the inland glaciers are speeding up. It’s this glacier acceleration that’s responsible for most of the increase in ice loss from the continent and this is contributing to sea-level rise”.

This research forms part of international efforts to improve the understanding of the interactions between ice and climate to improve the reliability of sea-level rise projections.

Though scientists are still researching the effects climate change, its existence is now rarely disputed. The future will require that we embrace new technologies that enable us to address climate change and reduce our impact on the environment.

Sustainable investment can work on many levels, but focusing on companies that take their environmental impact seriously is a very good place to start. Our new Guide to Sustainable Investment will iron out some questions, but we also recommend that seek professional and independent advice. Fill in our online form and we’ll put you in touch with a specialist.

Scientists call for a freeze on fishing in Arctic