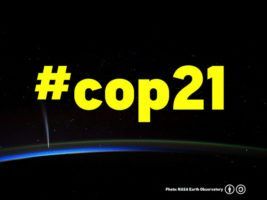 Following the news that The Royal Scottish Geographical Society (RSGS) have awarded the Paris COP21 leadership team with the 2016 Shackleton Medal for Leadership and Citizenship, Fabrice Leveque released the following statements:

“Félicitations to the Paris COP21 team. Paris was indeed an important landmark on the way to protecting people and planet from the worst-effects of climate change, and this reward is deserved recognition for the many people around the world who played a part in helping to secure the Paris climate agreement.

Scotland has a strong story to tell on climate change with world leading targets.

“It’s no surprise that Laurent Fabius has taken the time to come here to Scotland to accept this award on behalf of the COP21 team. Scotland has a strong story to tell on climate change with world leading targets, and the recent news that we’ve hit our 2020 climate target 6 years early, demonstrating how much we’ve achieved so far.

“However, much of our progress to date is based on Scotland’s success in deploying renewable electricity generation. If we are to secure the full benefits of a zero-carbon future, the Scottish Government’s climate action plan due later this year will need to do much more to reduce the climate emissions that come from our transportation and heating needs.”