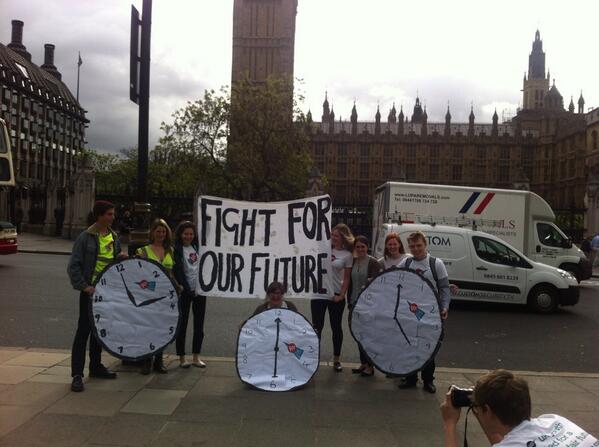 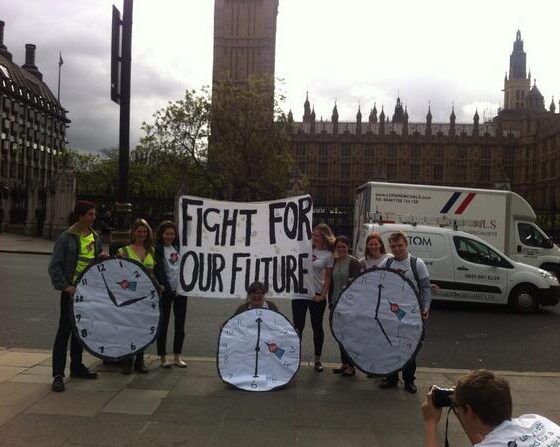 A group of young climate change campaigners gathered outside parliament on Wednesday, demanding that politicians from the three main parties give voters environmental options, as the clock counts down to the 2015 general election.

A year to the day until the polling stations open, issues such as immigration and the economy look set to be the hottest topics as Westminster warms up for the run-in.

This is despite ever more dire warnings from scientists on the dangers of climate change, fossil fuel usage and environmental devastation.

With these issues in mind, and holding aloft three oversized paper clocks, members of the UK Youth Climate Coalition (UKYCC) took to parliament to launch the Fight for Our Future campaign.

The clocks were delivered to the headquarters of the Conservative, Labour and Liberal Democrat parties, as reminders that time is running out to appeal to the green vote.

“We are willing and able to vote in 2015 but MPs have to give us something to vote for”, explained Francesca Carnibella, co-director of the UKYCC.

“As the year countdown to the general election begins, this action kickstarts a campaign to demand that MPs use the next 365 days to put young people and climate change on the top of the agenda if they want to secure our votes.”

“Everyone has seen the extreme weather across the globe over the past two years and the UK floods made sure that no one in this country can underestimate the importance of tackling climate change,” he said.

In a report published last year, a coalition of campaign groups warned each of the three main political parties that they have so far failed to put forward strong and coherent policies that will address climate change.

A number of recent public opinion polls also show that the wettest winter on record may have pushed climate change up voters’ agendas.

Though one Ipsos MORI poll did not rank the environment in the top 10 most important issues according to respondents, it found that the level of concern over the climate is at its highest level in six years.

Another recent survey, commissioned by WWF-UK, found that 47% of voters are willing to change their political allegiance based on which party was offering the best environmental policies.