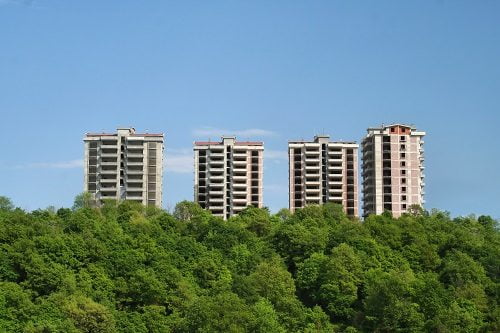 Cities – those grey, urban, concrete structures – could be the green centres of the modern world. Rolling hills and lush fields may be actually green, but in terms of contributing to a sustainable future, quiet countryside towns may have a far smaller impact.

Of course, urban areas contribute more to the degradation of the environment, emitting fumes and using resources at a far greater rate than less densely populated areas. Yet equally, city citizens use more public transport than rural dwellers, have the opportunity to recycle more and the ability to walk between places. Denser living also allows for more ‘sharing’, albeit often unconsciously, of resources.

A 2007 report from the International Institute for Environment and Development (IIED) looked at 11 major cities on four continents, including London, Tokyo, New York and Rio de Janeiro, and found that city dwellers had lower greenhouse gas emissions than the per capita average for the country. A Londoner in 2004 emitted the equivalent of 6.2 tonnes of carbon dioxide, compared with 11.19 for the UK average, and New Yorkers were found to register footprints of 7.1 tonnes each, less than a third of the US average of 23.92 tonnes.

Cities have to be the place where sustainable futures are developed. In 2007, the global population tipped to being predominantly urban, and this is only going to grow – by 2050 we are going to be up to 70% urban.

It’s not necessarily about building eco-cities. As important as it is to focus on the future, things have to happen now. There are around 170 eco-city projects around the world, with definitions varying, but it seems that many have failed, and some may be sustainable for the environment, but not for the people who live in them.

Dongtan, one of 10 eco-city projects in China, was a miserable failure, not balancing idealism with realism. Many of these cities are without hospitals, shops, and, therefore, people.

What it is about is developing initiatives that allow people to live the lives they are used to, but that facilitate the opportunity to make changes that are not so dramatic they become unattractive and thus are not committed to, but do make a difference.

The majority of eco-friendly projects and sustainability initiatives are coming out of cities. This is partly a result of the sheer number of people. As Steve Johnson in Where Good Ideas Come From and Leo Hollis in his more recent book Cities Are Good For You explain, cities are wonderfully creative places due to numbers and the connections between those numbers – fertile breeding ground for great ideas.

Although schemes such as London’s commitment to hybrid buses (with 600 expected to be in use by 2016) or the $2.6m awarded by the New York City Department of Environmental Protection to organisations with plans for capturing stormwater runoff as part of the Flushing and Gowanus Green Infrastructure Grant Initiative have significant and large-scale results (as well as cutting costs for local governments), the real inspiration comes from grassroots initiatives.

Here are three of my favourite city schemes, all proving that cities are good for us.

Created and run by “the Generators” – the name given to the young people involved with the project , this initiative simply involves taking an old skip and filling it with soil to grow fruit and vegetables, which they then serve at their own Skip Cafe, sell to local businesses, including the Guardian’s café, and turn into jams and chutneys.

The Hague is, as befits the capital of Europe, a leader in this field. Recognising that encouraging more people to live sustainably needs to have fun at its core, the city has organised a gardening flash mob, where more than 150 people turned up to ‘green the street’.

Living roofs and walls are growing in cities all around the world, and it’s not hard to see why, as they make so much sense. Making the best of underused space, providing green locations in areas where very few people have access to a garden, improving air quality, and looking great – they tick all the boxes.