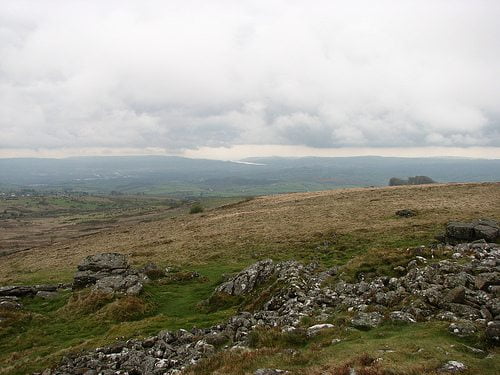 Dartmoor national park is a 368 sq mile area of moorland in Devon. Its status as a protected national park was confirmed in 1951, making it the fourth in the UK.

It is a rugged landscape, with its surface dotted with granite and tors. Until the early 19th century Dartmoor was not thought of as a place worth visiting. In 1789, Richard Gough damningly wrote that it is a “dreary mountainous tract“.

However, the park is now a popular destination with hikers, kayakers, rock climbers, cyclers, horse riders and anglers.

It is an area with a particular association with the mythological. Its ancient graves and stone crosses have inspired many ghost stories. According to local legend the area has been visited by the devil, no less, and has been home to a headless horseman, spectral Roman legions, pixies, and a hellhound – said to be the inspiration for the beast of Conan Doyle’s Sherlock Holmes tale The Hound of the Baskervilles.

The park is also archeologically rich, boasting many prehistoric remains from the Neolithic and early Bronze age. Stone rows and circles erected from as long ago as 5,500 years still stand.

Among its valleys also lie the ruins of a mediaeval village known as Hundatora, which predates the Domesday Book. It is believed that it was inhabited for centuries, before it was mysteriously abandoned around 1350. It has been suggested that the villagers were either wiped out by the Black Death, or were forced to leave by the region’s changing climate.

More recently, Dartmoor was used in Steven Spielberg’s epic big screen interpretation of War Horse. Differing in opinion with Richard Gough somewhat, the iconic director said of the area, “Never before, in my long and eclectic career, [have I] been gifted with such an abundance of natural beauty.”

If you live near Dartmoor national park and are interested in ethical investment, read The Guide to Sustainable Investment 2013 for more information, and The Guide to Ethical Financial Advice 2013 to find a specialist ethical financial adviser near you.