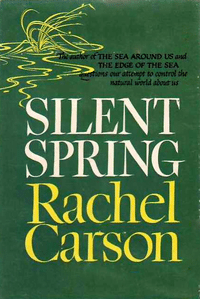 Rachel Carson’s Silent Spring is as groundbreaking, controversial and relevant today as it was when it was first published in 1962.

The book argues that uncontrolled and unexamined pesticide use harms and even kills not only animals and birds, but also humans. Carson documents the detrimental effects of pesticides on the environment.

The text includes strong accusations against the chemical industry and a call to look at how the use of chemicals can cause damage and impact the world around us. Carson successfully demonstrates the fragility of the biodiversity on the planet and emphasises how chemical use can have a large repercussions.

Silent Spring has been credited with launching the contemporary American environmental movement. It has been widely read and pointed out concerns around the use of pesticides and the pollution of the environment.

Since publication, Silent Spring has created a debate among critics and supporters bringing the issues discussed to the forefront and allowing people to get involved and gain additional insight. Whilst parts of the book are now outdated, science has expand on the thesis and research in Silent Spring allowing readers to broaden their knowledge.

It was originally published as a series of articles and as a result seems a little disjointed at times, with some sections being isolated.

However, the fundamental point is that Silent Spring is a well written and inspiring call to action, and deserves its status as one of the seminal texts of the environmental movement.