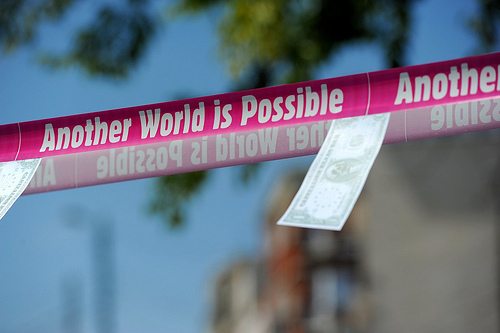 In light of the G8 arrests yesterday, it’s time we took capitalism back from those who have hijacked it and its definition.

The founding fathers of capitalism, Smith and Hayek, wrote complex treatise on free markets and economics. They were of their time and their argument bounded by the rationality of their era.

They all developed theories in an industrialising and industrial age, well before the advent of game-changers such as globalisation, the internet, high frequency trading, climate change and resource scarcity. They did not foresee them or account for their effects.

They, to a greater or lesser extent, accepted weaknesses and constraints on the market, from moral sentiments (interest in the fortunes of others – Smith) to negative externalities (harmful effects of deforestation, pollution and fraud – Hayek).

Milton Friedman, who was highly intolerant of any government intervention, can only claim as a success the development of the US PAYE system in 1942 in his role as a government employee. Ayn Rand, that other darling of small-state neoliberal theory, died in obscurity and in the care of the state she despised, albeit reluctantly.

There are limits to capitalism in theory and practice. Those who extoll the virtues of unfettered capitalism are blind to its vices – even those acknowledged by those who developed the theory.

Negative externalities matter. Enterprise and markets, whose primary motivation is individual profit, need to be regulated to take into account all externalities and the full cost of their activity.

Wealth and power concentrate as a mathematical certainty. There needs to be redistribution, whether it be on power, income or wealth. Monopolies and oligopolies needs to broken up. Politicians and political parties should not take the corporate shilling.

All human activity has an ethical dimension. Civilisation depends on it. The growth of capitalism and the lifting of huge swathes of humanity out of poverty coincided with a philosophical debate and rise in human rights and democracy. It’s no coincidence.

It is self-evident that capitalism as the plaything of wealthy corporations and their friends in politics and the media has catastrophically failed the planet, society and the economy.

A responsible and sustainable capitalism would be a truly remarkable human achievement. It is not an idealist’s pipedream – but it would need concerted global political leadership.

In a few days, the UK will host the G8 group of the world’s richest nations. A bold statement on reinventing capitalism would be a small step in the right direction.