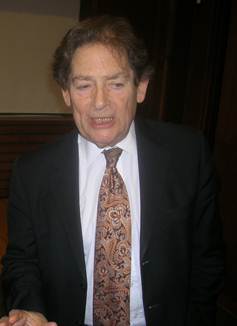 The Roman statesman Cicero quoted Lucius Cassius’s simple maxim “Cui Bono?” or “Who benefits?” This year some excellent investigative journalism by The Independent, DeSmogBlog and The Guardian revealed some startling information about the original funding of the US Tea Party movement and the current funding of climate change deniers.

Back in 2011, the brilliant blogger, Graham Readfearn, pointed out that mining billionaire Gina Rinehart had funded a recent trip made by serial climate change denier Lord Monckton.

We have believed for some time that those who profit most from weak environmental regulation have been actively funding climate change deniers. However, we did not expect the smorgasbord of evidence we were to get in one week.

In January, The Independent ran with the story that an anonymously funded group, The Donors Trust, was funding climate change denial think tanks.

On Monday last week DeSmogBlog covered a British Medical Journal report that said the US Tea Party had been created by the big tobacco lobby and billionaires, not, as many of its supporters believe, as a grassroots movement.

This is the self-same tobacco lobby that had successfully lobbied against legal action based on the proven link between smoking and cancer.

Then on Valentine’s Day, The Guardian revealed even more of the behaviour of the secretive Donors Trust that had “distributed $118m to 102 think tanks or action groups which have a record of denying the existence of a human factor in climate change, or opposing environmental regulations.”

This is in turn picked up by DeSmogBlog, which published a powerful chart (see right), illustrating how the Donors Trust had rapidly overtaken the Koch brothers and Exxon Mobil as funders of anti-environmental pressure groups. 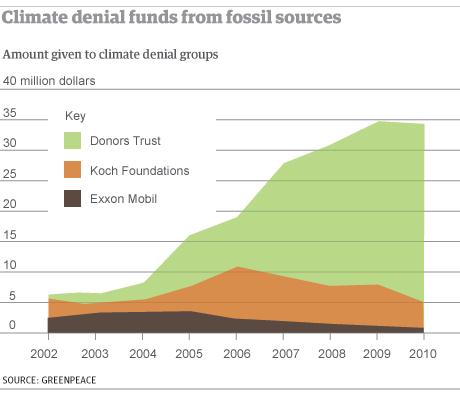 However, this is not just a peculiarly US phenomenon. As The Guardian revealed on Saturday, the same secretive techniques are being used in the UK with the Global Warming Policy Foundation being less than forthcoming about its funding. This groups is led by one of our horsemen of the climate apocalypse and former ‘big bang, boom and bust’ chancellor of the exchequer, Lord Lawson.

If these organisations are genuinely independent of vested interests and not ideologically driven, why are they so coy about who funds them?

One commenter, photosymbiont, on The Guardian rather perfectly answered this question with reference to a report that the Donors Trust was funding media campaigns to halt the expansion of renewal energy in some US states:

Why do they need to remain anonymous, while supporters of renewable energy don’t? Compare the two arguments:

1) I’ve got a lot of holdings in coal and oil and I want my investments to pay off over the next couple of decades. Yes, coal and oil production leads to global warming and has all kinds of associated air and water pollution problems, but I love hanging out at the country club and watching my dividends role (sic) in. Sure, fossil fuel energy is on the way out and will be replaced by renewables, and the countries that lead the way will end up as economic winners with good trade budgets, but I’m really more concerned about my own lifestyle than the economic or ecological health of my country, so I’m going to run this denialist campaign aimed at blocking action on global warming and preventing renewable energy from cutting into my market share. Gosh, I better do this in secret using astroturf front groups or everyone will laugh in my face, right? I mean, “Coal company investor says global warming isn’t a problem and renewable energy won’t work…” Well, nobody would buy that, would they? Sounds rather like “Kerosene lamp manufacturer says new-fangled electric light is uneconomical and dangerous,” doesn’t it? So, front groups it is.

2) Look, global warming is a problem and so is fossil fuel related pollution, but we can eliminate fossil fuel dependence by rapidly developing wind and solar technology, coupled to energy storage systems (as well as more efficient end-user tech in areas like transportation, heating/cooling, etc.). Whoever develops this technology first will be in a great economic position, [too], since they can then sell it to the rest of the world. Thus, the smart thing to do is eliminate all the subsidies for fossil fuels and nuclear – which amount to billions each year – and instead focus government efforts and private capital on rapidly growing renewable energy capacity. Yes, I’m invested in renewable energy companies that will benefit from this approach, but since this is an economic win-win for almost everyone (except argument #1) in my country, and will also clean up the air and water, I don’t need to sneak around in secret setting up astroturf campaigns to promote my agenda. And yes, I intend to make a lot of money off renewable energy, within reason, but everyone will benefit  from limiting global warming and environmental pollution as a result, so I have nothing to hide.

That would be the explanation for the secrecy, right?

Who benefits from campaigning against climate science? Certainly not society at large or the planet.

In short, resource billionaires benefit the most from the fossil fuel status quo and are waging a war against climate science, the environment and everyone else.