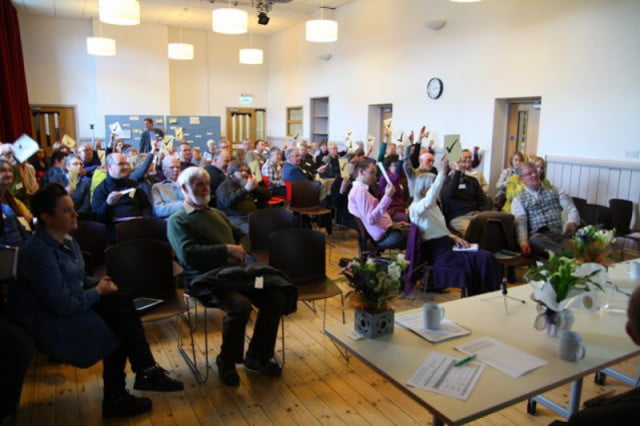 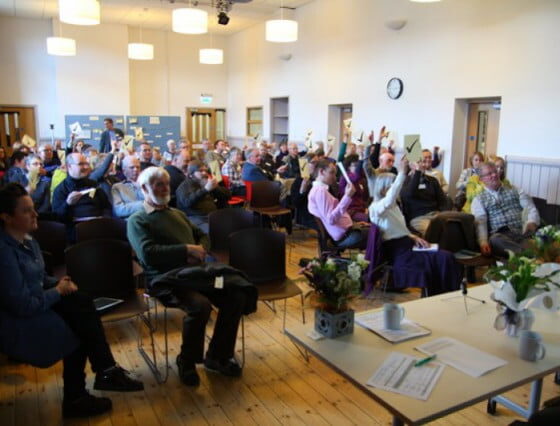 “Any other business?” asked Ecology Building Society chair Malcolm Lynch, obligatorily, at the end of the organisation’s annual general meeting (AGM) in Leeds last month. A man in the audience stood up.

“I’d just like to thank everyone for putting on a fantastic event”, he said. Mumbled agreement from all in attendance preceded a round of applause. This was no ordinary AGM.

More often than not, the mainstream media’s coverage of AGMs is usually because of some kind of scandal or a shareholder revolt. Indeed, the Barclays AGM had made headlines in the days before Ecology’s event.

Seventy-five-year-old shareholder Joan Woolard made headlines when she called the board “a bunch of crooks” and other, less printable things. Twelve months earlier, over a quarter of Barclays investors had voted “no” to the bank’s executive pay package.

The next few months would be challenging for Barclays (and rightly so, after a whole host of avoidable misdemeanours that included Libor rigging and “aggressive” tax avoidance). Clearly, this has left many shareholders feeling pretty angry.

The Ecology event, though, was markedly different – the chalk to mainstream banking’s cheese. It engaged with members in a way that the likes of Barclays and co. wouldn’t – and couldn’t – do.

But this should not be surprising.

Blue & Green Tomorrow sees sustainable investment and ethical finance as essential, and Ecology is one of the more popular options for savers and mortgage customers in the UK.

Its chief executive, Paul Ellis (who, according to a colleague, “bleeds green”), spoke to B&GT for The Guide to Sustainable Banking 2012.

Just less than three weeks before Ecology’s AGM, the society unveiled its annual results for 2012.

At the time, Ecology described the numbers as “further evidence that an ethical, long-term approach is essential for the future of the UK’s financial sector.”

But while these statistics are encouraging, it’s important to look at them in relation to the whole market. The Council of Mortgage Lenders, the industry’s trade association, estimates that mortgage lending in the first three months of 2013 stood at over £33 billion – so £77.34m is somewhat of a drop in the ocean.

That said, the National House-Builders Council registered 22% more new homes in that period than in 2012. Some 31,739 new builds – the highest amount since 2008 – were unveiled between January and March. This is a market that smaller mortgage lenders like Ecology need to seriously tap into.

The first two hours of its AGM consisted of the board of directors going through the ins and outs of the annual report, before speaking briefly about themselves – and why the society’s members should re-elect them for another year.

All four directors were elected, with well over 90% voting in favour in each case. The remuneration policy and accounts were also passed without fuss.

The role of KPMG as auditor, however, was not so convincing. The firm – one of the so-called ‘big four’ accountancy giants, along with Deloitte, Ernst & Young and PricewaterhouseCoopers – is often held to account over its ethics, and its involvement in tax avoidance schemes.

Ellis and finance director Pam Waring both gave detailed explanations about why Ecology had chosen KPMG – the crux being that the task of auditing the building society was too large for smaller accountancy firms.

Putting the financial reports aside for the afternoon, attendees were invited to take part in workshops and listen to a couple of keynote speeches about ‘people powered money’ – the tagline that Ecology had chosen for its event.

Among the contributors were Bruce Davis, co-founder of Abundance Generation; Laura Willoughby, chief executive of Move Your Money; and Rob Harrison of Ethical Consumer magazine.

At one point, Ellis – in 20 minutes – attempted to answer the question, “What’s gone wrong with finance and what are the alternatives?” The fact that he had to noticeably rush his contribution spoke volumes on both accounts.

Throughout the afternoon, the enthusiasm for sustainable finance was evident. Members explained just how badly the big banks had treated them, and their reasons for choosing a more ethical home for their finances or mortgages in Ecology.

But building societies are a dying breed. Fewer than 50 still exist in the UK. Nationwide, Yorkshire Building Society and Skipton are among the best-known, while Abbey National, Alliance & Leicester, Halifax, Bradford & Bingley and the Woolwich are among those to have demutualised in the last two decades or so.

Despite their decline, building societies remain a more responsible alternative to mainstream banking. However, they by no means have all the answers to finance’s problems.

One big barrier is to overcome the age gap. Part of the reason for some of the bigger institutions dropping their status as a mutual is to reach out into different markets, so that they don’t just offer savings accounts and mortgages. Naturally, this has seen the average age of a building society customer rise.

Being an organisation with a focus on sustainability, a number of Ecology members had taken out a mortgage because of Ecology’s focus on energy efficient eco-homes (including one gentleman who waxed lyrical about the government’s failure to incentivise green buildings. He had some rather choice words to say about the green deal, too).

Reaching out to younger customers – those building for their future, rather than building their homes – was highlighted as a key challenge for the society. Young people want the whole shebang – online access and more – from their bank accounts. This is a shortfall that many building societies are struggling to overcome..

Bridging the gap between the two demographics is therefore crucial for building societies to survive, and more importantly, flourish.

Being able to have such a personal relationship with the board is a USP that societies need to maintain. There was none of the more typical “I understand your concerns, but…” from the board; instead, you got the impression they genuinely wanted to know how they can make their business more transparent, democratic, popular and sustainable.

The AGMs we read about in the news ought to be the abnormalities. People should be leaving Barclays’ AGM thinking, “What, no workshops? I can’t have a coffee with the chief executive? How odd!”

As the Global Alliance for Banking on Values (GABV) – of which Ecology is a member – said in its Berlin declaration document from March, in order for banking institutions to become more stable and people-orientated, they need to focus on transparency, sustainability and diversity.

These three points really are key to getting us out of the torrid mess that a select few irresponsible institutions have landed us in.