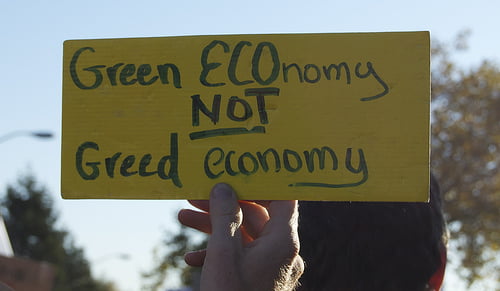 Of the many issues and news stories in the media and our minds, the economy and the environment are two that often warrant the most column inches. This commonality is however what many deem to be the only feature that the two share.

Admitting to a focus on the economy has you cut out as a bonus busting capitalist, whereas a fondness for the environment has you eternally pegged as an unwashed eco warrior. Is one really more important than the other and are they destined to be forever in conflict?

Back in 2009, in the annual Gallup poll that questions people as to whether they would prefer the economy or the environment to be given precedence by the government, the economy was voted as the most pressing concern for the first time in over 25 years. Not a surprise?

Whilst carbon footprint, organic produce and global warming remain buzzwords that we know should be tripping off of our tongues, and whilst most of us are genuinely concerned by the environment, when it comes down to the realities of day-to-day living, the environment is afforded less importance.

There are a limited number of things that fit into our framework and that we can process. Starting with ourselves, rippling out through our families, social circles, we think of the environment as the widest circle in which we operate – the other and the world in which everything else exists.

Whilst using money as an encouragement to make changes that will benefit the environment seems to work in the short-term, it is not a sustainable solution

The partially substantiated belief that says increased attention upon nature and our surroundings will lead to a decrease in jobs and affluence stops us from considering the two in the same breath. Instead, we see them as contradictory to one another, and so are willing to accept economic destruction in exchange for cheaper prices.

However, to see them in a dichotomous pull from each other is the result of a narrow view of what the environment actually is. In fact in the Oxford English Dictionary, the concept of the natural world as the environment is the second option – the first being the “surroundings or conditions in which a person, animal, or plant lives or operates.”

If you consider Maslow’s hierarchy of needs, our food, shelter and warmth – the very things that nature and the environment readily afford – should be at the nub of our consciousness. But of course, those things all cost money.

Will we only recognise the value of the environment when it is quantified in economic terms? Can we ever reconcile the apparent conflict that exists between the economy and the environment, in the framework within which we define it. Put simply, is it only money that is able to talk?

It would seem so. Monetary incentives to encourage people to consider the environmental impact of their decisions seem to have worked.

Councils that have used monetary incentives to encourage recycling have seen a large increase in the take up in their areas. The Recyclebank scheme in Windsor and Maidenhead, whereby private firms sponsor shopping incentives, was found to improve recycling rates ahead of the national average.

The road tax is now calculated in direct correlation to the emissions and efficiency of the vehicle, although it is hard to tell whether this has been effective, as cars such as the efficient Vauxhall Corsa have always been popular.

And of course, how many people have their weekly wash on a 40C heat rather than 50C, simply because they know it will reduce their bills and not because it uses less water?

People, businesses and governments struggle with the concept of cutting carbon emissions and the like, due to the belief that it will reduce jobs and outputs.

The relationship, or at least uncanny correlation, between emissions and GDP growth is very clear, and is undoubtedly one of the reasons that environmental targets often become sidelined if economic ones are not being reached.

The 2013 UK budget saw oil drilling, high-carbon infrastructure and fossil fuels put very much at the centre of things, suspending environmental regulation. But this is not always the case.

In the US, a scheme modestly titled Smart Growth America found that stimulus dollars spent on public transport yielded 70 more job hours than those spent on highways.

It is estimated that 131m work days are lost each year in the UK due to sickness, costing businesses around £3.1 billion. Fewer germs, less pollution, and healthier eating could reduce all of these – an improved environment in which employees operate can reduce the economic cost.

Prices of food and energy increase partly due to corporate greed, but also due to the simple economic principles of demand and scarcity. Flooding, global warming and environmental destruction have all made staples such as wheat and wood much more difficult to get hold of, and thus much more pricey.

Economic activity draws from the environment in which it stands, both using resources and emitting wastes

Whilst using money as an encouragement to make changes that will benefit the environment seems to work in the short-term, it is not a sustainable solution. Quantifying the value of the environment in those terms usually reserved for the economy means that one becomes subsumed in importance in the other.

What is around us and the world in which we live becomes secondary to the metal in our pockets.

The relationship between the two must not become one of hierarchy, but where the inter relationship of the two is acknowledge.

The productivity of an economic system depends on supply and quality of natural environment and the resources within which it operates. Economic activity draws from the environment in which it stands, both using resources and emitting wastes.

If these two forces are balanced, then prosperity (in all its definitions) won’t be threatened. The reality is that the economy and ecology are interlinked and must be addressed as two of the many parts that allow a society to not only function but flourish.

Both are fundamental to the continued prosperity of humans, which is ultimately the goal of us all.