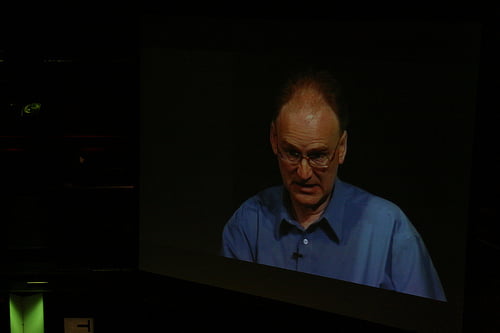 ‘Keep calm, move along, nothing to see here’, is the increasingly tired mantra of climate change deniers. Hurricane Sandy, one of the wettest years on records in the UK, and increased desertification are just normal events.

Ridley calls in evidence from the environmental professor, Roger Pielke.

We cannot tell from Ridley’s article whether this is Roger A Pielke Jr or Roger A Pielke Sr. This may be deliberate ambiguity or simply accidental, but when writing about science it is both essential and honest to clearly identify your sources, so people can check your more dubious assertions. Ridley, an Oxonian, should know this.

Whichever it is, this particular academic has ‘documented’ that floods, hurricanes and tornadoes have shown no increase since the 1950s.

Despite this powerful ‘documentation’, the industry that is directly affected disagrees. Risk managers in major insurers are gearing up for the almost literal flood of claims to come. It is insulting to honest risk professionals to equate their diligent work with the anecdotes of pub bores. Ridley goes further, accusing insurance companies of having a vested interest in bidding up anxiety. No evidence is presented for this slanderous assertion. They just do, apparently.

If it is Pielke Jr, which we strongly suspect, he is author of The Climate Fix: What Scientists Won’t Tell You About Global Warming, a book which is described by one reviewer as “slick words from a climate change denier” . His choice of book title suggests scientists are dishonest as a breed, which is itself a remarkable slur.

Dr Stephen Schneider of Stanford University has said that, with Pielke Jr, “one consistent pattern emerges – he is a self-aggrandiser who sets up straw-men, knocks them down, and takes credit for being the honest broker to the explain the mess – and in fact usually adds little new social science to his analysis.”

Ridley then asserts that there has been no net warming for 16 years. This claim has been comprehensively demolished on a number of occasions (including in analysis published this week).

He casually throws in ‘peer-reviewed studies’ to support his assertion, with some serious sounding agencies and institutions. One of those three peer-reviewers is James Annan of the wildly climate change denialist Global Warming Policy Foundation. Ridley does not see fit to mention this association or his own close relationship with the organisation (he’s a member of its advisory council).

Responsible journalism means declaring your interests. Unless you have something to hide.

It also turns out that another ‘peer-reviewer’, Norwegian PhD student Magne Aldrin, has not had their research peer-reviewed. Again, Ridley feels no need to reference this.

Climate science is a work in progress; the IPCC has made mistakes. To use this as evidence to dismiss all climate science is irresponsible. Science is not dogma, but shifts over time. Hypotheses are tested. If only climate change deniers could put forward one peer-reviewed paper that genuinely supports their increasingly hysterical claims.

This is unhelpful journalism. Appearing as it does in the pages of a national ‘quality’ newspaper, one would expect sources and assertions to be checked thoroughly. It took us about five minutes to find the conflict of interests and erroneous claims in the article.

Falsehoods presented as facts do not help this serious debate, but are the rule for climate change deniers.

But Ridley has form here.

As a zoologist (the study of animals) it is unclear what academic credentials and expertise he is using to criticise climate science (the study of climate).

What is telling about Ridley’s mindset is that it was under his chairmanship that Northern Rock pursued what the Treasury select committee described as a “high-risk, reckless business strategy”.

It appears the leopard cannot change his spots and he wishes us to pursue a high-risk, reckless strategy with our climate.

Our climate is becoming increasingly erratic. It is irresponsible to assert otherwise. Similarly, it is irresponsible of The Times to print unfounded assertions as fact. Freedom of speech is not the same as the freedom to mislead.

Weather is merely the tip of the iceberg, but it is not the climate. To use ‘weird weather’ as a platform to attack climate science shows the poverty of Ridley’s thinking.

Ridley urges us to “forget the anecdotes and face the facts“. We’d be delighted if he declared his interests and those of his fellows. Ideally, he’d forget his prejudice and accept the facts.