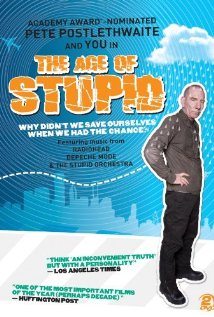 The year is 2055 and the Earth is devastated. A man looks through the ‘global archives’, viewing clips and interviews from our current time, asking why we didn’t act when we still had the chance.

The drama-documentary follows several different storylines from across the world, that emphasise how our choices led to a global crisis, and ultimately to the destruction of civilisation.

In England, a town votes to deny the permit needed to construct a wind farm and reduce their carbon footprint. In contrast, a man in India is able to set up a low cost airline. The stories highlight how consumerism and a lack of social responsibility is affecting the whole planet.

The archivist, played by the late Pete Postlethwaite, looks back at warning signs that were overlooked, such as more intense hurricanes, like hurricane Katrina, due to rising ocean temperatures. It also looks at the Iraq war, which it labels a ‘resource war’, highlighting our unhealthy dependence on oil.

The film claims we are bringing about our own extinction, with 2015 projected to be the point of no return. It proposes a number of measures to solve the problem, including carbon rationing. The Age of Stupid successfully achieves its aim, to show us what the world will look like if we fail to take action.

Directed by Franny Armstrong, it was one of the first examples of a crowdfunding project, raising £450,000 from 223 individuals to help bring it to our screens.

The creative viewpoint of the documentary sets it a part from others. The Age of Stupid will certainly stimulate discussion.