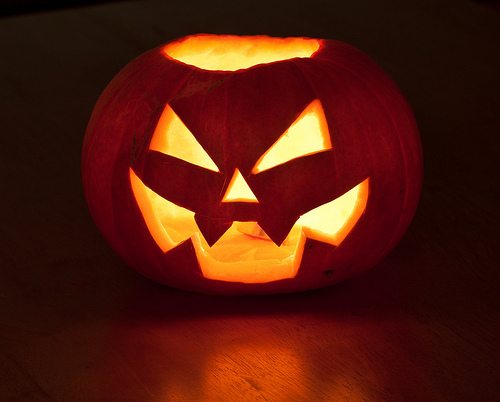 Five ways to have a sustainably spooky Halloween

Halloween is a big business. In the UK between 2001 and 2010, retailers reported an astronomical rise in Halloween-related spending, from £12m to £280m. This year, that figure is expected to reach £315-325 million, according to analysts at Planet Retail.

In the US, spending reached a record-breaking $8 billion in 2012, although that figure is expected to decrease to $6.9 billion in 2013, as some consumers try to cut costs.

But of course, as with any spending decision there is more to consider than just your purse or wallet (like being safe). As one of the biggest consumer events on the calendar, the environmental impact of Halloween is significant. With that in mind, we have compiled some scarily useful tips to make your All Hallows Eve cheaper and more sustainable.

1. Make your own costumes and decorations

Costumes are one of the biggest Halloween expenses, but this spending can easily be avoided by recycling old clothes, household objects or charity shop finds. Get the kids involved, too, making Halloween all the more enjoyable.

For an added sustainability edge, why not give your fancy dress an environmental theme this year? 2nd Green Revolution has posted some of its favourite suggestions on its website, from dressing up as a homeless polar bear, a drought (by drinking all your friends drinks and eating all their sweets) or a glacier from the year 2050 (by carrying around a glass of water).

Surely we should be more scared of impending climate apocalypse than a bed sheet with eyeholes cut in?

Another way to make Halloween less scary for the environment is to stock up on more eco-friendly supplies for when the trick or treaters come knocking.

The campaign group Rainforest Action Network (RAN) has warned that goodies you dish out tonight could be contributing to the destruction of rainforests in south-east Asia and devastating the habitat of endangered orangutans.

There are obvious benefits to handing out healthier snacks, but avoiding sweets altogether might not make you the most popular household in your area. Alternatively, you can shop around for organic sweets or chocolates. Try to avoid plastic packaging, as plastic waste can be one of the most damaging pollutants.

Another great way of cutting down on plastic waste is using a reusable cloth or canvas shopping bag to carry that hefty trick or treating haul.

According to figures from Wrap, a government body that promotes recycling, Britons used 8.1 billion plastic carrier bags in 2012, with the average shopper using around 10 a month.

For the good of our planet, that figure needs to come down. Plastic waste can be particularly devastating to marine life, threatening endangered animals such as turtles. A true horror story, if there ever was one.

Candles are, of course, a Halloween essential. However, try to avoid paraffin candles, as these are petroleum based and can generate indoor air pollutants.

Complement them with LED lighting, which cost around 80% less to use than incandescents.

According to statistics collected from supermarket chains, 18,952 tonnes of pumpkins were sold in the UK and US during Halloween season last year. That’s enough to make 41m pumpkin pies. However, the problem is that generally, they aren’t used to make pumpkin pies.

Many households carve up more than one pumpkin on Halloween and then throw them away the day after. They then end up decomposing on landfills, contributing to greenhouse gas emissions.

To go green, make use of the pumpkins to cook up a tasty post-Halloween treat. Buy only one organic pumpkin to limit waste, or even better; grow your own (although this tip may be a little late for this year).