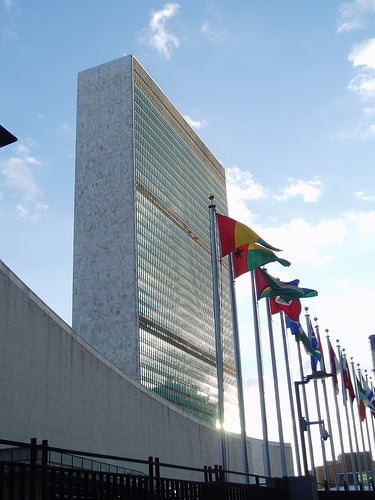 The United Nations was born out of the ruins of the second world war. It replaced the ill-fated League of Nations, which had failed to prevent that brutal conflict. Simon Leadbetter asks whether we will have to wait and see what emerges to tackle the effects of catastrophic climate change or whether the UN, and its leading nations, can act to avert this brutal transformation.

The United Nations Organisation was inaugurated today, 67 years ago, in a short ceremony at the US State Department in Washington DC. Twenty-nine countries, including the United Kingdom, were the first to ratify the UN Charter of the 50 who had signed up to the organisation in June 1945.

The Charter upheld human rights and proposed that nations should work together to overcome social, economic, humanitarian and cultural challenges. The stated aim of the UN is to facilitate cooperation in international law, international security, economic development, social progress, human rights and achievement of world peace. In an early sign of the US exerting its post-war muscle, the chosen headquarters would be in New York, despite opposition from the UK, the Netherlands and France.

At the time, there was no mention of meeting environmental challenges. Very little was then known of the science behind our climate, the incredible vulnerability of life on Earth or the impending depletion of finite and vital resources.

The organisation consists of six main organs. The first two, the General Assembly of all members and Security Council (with five permanent members – China, France, Russia, the UK and the US – and six temporary members) are probably the most famous.

There is also an Economic and Social Council which, along with the International Monetary Fund (IMF) and the World Bank (and non-UN body, the World Trade Organisation), is among the dominant economic bodies in the world; the International Court of Justice (which is based at The Hague in the Netherlands) and the Secretariat which consists of the 44,000 civil servant under the leadership of the secretary general.

There have only been eight secretary generals in the last 67 years, with Norway, Sweden, Burma, Austria, Peru, Egypt, Ghana and South Korea providing the diplomatic statesmen that have led this organisation. The incumbent is Ban Ki-moon, South Korea’s former foreign minister. This is definitely a man cut out for dealing with difficult situations considering his own country‘s difficult northern neighbour.

The final organ, the Trusteeship Council, was designed to supervise administration of colonies, former mandates of the League of Nations and territories taken from defeated nations – the last of these to join the UN was Palau and the Council is now inactive.

Seventeen organisations and specialised agencies make up the UN System alongside many of the organisation’s own programmes and agencies. These include the World Bank, the IMF, the World Health Organisation and, our own favourites: PRI, the Principles for Responsible Investment and UNFCCC, the United Nations Framework Convention on Climate Change.

By 2012, membership had grown to 193 members states, as many former colonies became independent and the old Soviet Union fragmented.

For 44 years, the Cold War stand-off between the US and USSR and their allies created a kind of uneasy equilibrium, with the tensions between the two released through proxy wars, client states and the UN Security Council. The most famous set piece took place when US ambassador Adlai Stevenson challenged Valerian Zorin, the Soviet ambassador, during the Cuban Missile Crisis, which ‘celebrated’ its 50th anniversary last week.

The fall of the Berlin Wall, subsequent collapse of the Soviet Union and the economic and military rise of China and India, have all conspired to shatter that equilibrium, just as the world is gearing up to face its biggest challenges yet.

As anyone knows who watched the original series Big Brother, putting 11 people in a house together creates some significant relationship and interpersonal problems. Putting 193 nations together, despite the restraint and skill of trained diplomats, representing their massively different degrees of soft and hard power, competing aims and philosophies, is akin to herding cats.

Today we face three existential threats, which have no regard for economic or military might, and cares not one jot for manmade borders.

Climate change, environmental degradation (including biodiversity loss) and resource scarcity all pose clear and present dangers to our way of life. While those nations, such as the UK, with the most benign climates and deepest pockets may be able to adapt to the changes those three threats represent, mitigating against them represents the cheapest and most prudent course of action in the long-term.

The UN has done some incredible work herding its member-state cats, holding a Conference on Sustainable Development (Rio+20) this year, 20 years on from the original Earth Summit, which led to the aforementioned Climate Change Convention, the Kyoto Protocol, Agenda 21 and the Convention on Biological Diversity.

The Millennium Development Goals of 2000 remain one of the UN’s towering achievements, as each goal had specific targets and dates for achieving those targets. We can’t let this praise pass without mentioning the PRI again, as featured online and in our recent Guide to Sustainable Investment. That said, sign-up and progress on all of the above has been uneven.

All international frameworks and agreements, even bilateral ones, invariably struggle to gain unanimity on anything but the vaguest statements of noble intent. The US continues to be a persistent outlier state, from an international perspective, by refusing to conform to many international agreements and standards. As the world’s only superpower, for now, it probably feels it has earned the right to exert its muscle.

As we celebrate 67 years of the United Nations, and the optimistic spirit of global collaboration it represents, we hope that over the next three years it can provide the leadership and focus we need to address the triple threats above, before it is too late. Otherwise, at 70, the United Nations, like so many post-War bodies, will increasingly look a little tired and unfit for purpose.

As we stated last week, it is for the United Kingdom and its fellow leading economies of eight nations (who contribute almost half of global GDP), to set the pace and example for rapid and increasing sustainable development. Sustainable development in the real sense of balancing the needs of planet, its people and everyone’s prosperity. Prime minster David Cameron deserves praise for defending the international development budget against the parochial and ultimately self-defeating interests of his fractious backbenchers.

Future generations will not forgive us easily for hiding behind our current but temporary economic woes, and not dealing with the future more permanent ecological ones, in a timely and pre-emptive fashion.