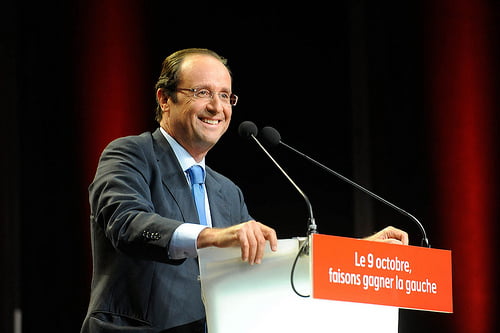 Francois Hollande’s presidential election will shed new light on France’s nuclear debate as the nation prepares for a likely energy source swing away from nuclear and towards renewables, writes Jamie Mckenzie.

The aftermath of the unprecedented triple disaster – quake, tsunami and crippled nuclear reactors – that struck the Fukushima Daiichi plant on March 11 last year told a story about the extraordinary resilience of Japanese society, and also about the imminent dangers of nuclear power.

Now, more than one year on, the Japanese Government has shut down all 54 of the country’s nuclear reactors following the human and environmental risks posed by the triple meltdown.

The aftershock from Fukushima shook global public confidence in nuclear power massively. Germany, which previously obtained a quarter of its electricity from nuclear energy, decided to implement a phase-out plan in response to growing pressure from anti-nuclear federal states.

Now, the German Government is shifting its energy policy towards energy-efficiency and renewable energy, focusing primarily on developing solar and wind as part of the vision to generate 20% of its electricity needs from renewables by 2020.

France’s newly installed president, Francois Hollande, already signalled his environmental views when he turned up to a ceremony at his presidential palace on May 15 in an environmentally-friendly Citroen car.

Combined with remaining public doubt over nuclear energy, the socialist leader’s new approach to energy solutions indicates that France – as one of the world’s nuclear powerhouses – may be next to phase-out the energy source.

Historically, France has been very active in developing nuclear technology, deriving over 75% of its electricity from nuclear energy because of its long-standing policy on energy security. The nation currently has 58 reactors operated by Electricite de France (EDF) – a present situation created by the French Government deciding in 1974, after the global oil shock, to quickly expand the country’s nuclear capacity due to limited inland energy resources.

And it was not until 2003, that the first national energy debate called for the defining of France’s energy mix in the context of a sustainable development agenda which was increasingly percolating global governance.

In 2005, a French law established guidelines for a more transparent energy policy, setting out a research policy for developing innovative renewable energy technologies with greenhouse gas emissions reductions in mind.

Yet Hollande’s predecessor, Nicholas Sarkozy, and his centre-right party, remained fixed on nuclear power, giving little thought to the promotion of a more sustainable economy.

But now, Hollande has already committed to reducing the electricity generated from nuclear power from 75% to 50% by 2025. One of the first closures will be the Fessenheim power plant, whose twin reactors are the two oldest in France.

Perched upon the banks of the Rhine and just 1.5km from the German border, the geographic location of the plant marks a boundary between nuclear ambitions – one of which will now change as France and Germany begin to converge in their previously diverging nuclear trajectories after Fukushima.

Since its construction in 1976, anti-nuclear campaigners and ecologists have continually targeted the Fessenheim plant, voicing concerns about the danger of weapons proliferation, imminent plant meltdowns and inadequate waste disposal management. More specifically, Fessenheim has received criticism because of its position in a seismic zone, as in 1356, an earthquake destroyed the city of Basel – just 30 miles south.

In addition, the concrete containers which surround Fessenheim’s reactors are too thin to meet French regulatory standards, measuring just a fraction of the thickness of those at the Fukushima Daiichi plant in Japan – one of which ruptured in the disaster there.

The dangers of nuclear power are clear. But in both Germany and Japan, questions have been raised over how well the energy supply gap can be filled without nuclear, and indeed without adding to carbon emissions caused by turning back to fossil-fuel consumption.

In Germany, a recent meeting between Chancellor Angela Merkel and energy industry executives posed several challenges in the shift towards green energy. The issues will be discussed at a meeting of German state premiers on May 23.

In Japan, reactors may go back online if they pass “stringent tests”, but perhaps the Japanese Government should seize the new opportunity to focus on developing renewables to the point where Japan’s energy mix can be more sustainable in the long-term.

President Hollande will undoubtedly also face criticism for cutting back by 25% on a comprehensive nuclear programme that would have made France the world’s largest net electricity exporter, creating one of the nation’s strongest economic foundations.

Calling for an increased contribution from renewable energy into France’s energy mix, Hollande stated in his pre-election manifesto for France, that he intended “to preserve the independence of France by diversifying our sources of energy”.

Wind and solar will be the most likely target areas – bringing both environmental benefits and creating new jobs. But France’s currently installed wind power contributes just 2.8% of the electricity consumed in the country – and although there is growth potential in the industry, the bulk of wind power is concentrated in Northern Europe. There will be higher promise in France’s photovoltaic and solar thermal sectors – but decisions have not yet been made.

Clearly, in countries with limited internal energy sources, nuclear power can provide a secure and carbon-free electricity base-load – but one that must be complemented with renewable energy.

Technologically-advanced governments should focus on investing in to the development of renewables technologies to boost the cost-effectiveness of clean energy. Only when the renewable potential is fully realised can nuclear power plants be taken offline – and only then – will there be a safer, cleaner and more sustainable energy solution for the well-being of ours planet and its future generations.