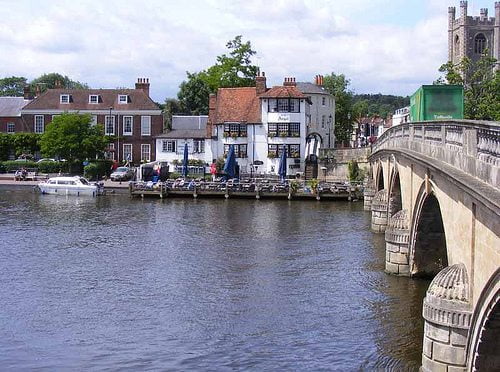 In at five in our look at the richest small towns in Britain through a sustainability lens, as ranked by consultancy firm WealthInsight, is Henley-on-Thames in Oxfordshire.

Located 23 miles south-east of Oxford and 37 miles west of London, it has about 450 millionaire among its 11,000 inhabitants.

As its name suggests, the river Thames plays a central role in the structure of the town. Its famous five-arched bridge was built in 1786, and Henley is a renewed rowing centre, home to many regatta competitions.

Several famous people have lived in Henley. Oasis frontman Liam Gallagher and English actor Orlando Bloom have properties in the town. Past residents include author George Orwell and Beatles guitarist George Harrison, and Boris Johnson was MP for Henley before being elected mayor of London.

Henley is also home to country house Fawley Court, part of the English heritage, which was used during the second world war as a refuge for displaced Polish children.

Oxfordshire county council is well aware of climate change and how it could affect the lives of its residents. It expects to see drier summers, wetter winters and more extreme weather over the next 50 years.

The council has managed to reduce its carbon dioxide emissions from its reliance on oil and gas, thanks to specific strategies such as green tariffs and carbon offsetting.

It also works with school and businesses to keep their emissions under control, and works on energy efficiency through the Carbon Reduction Commitment (CRC), the government’s mandatory scheme that tracks and ranks the emissions from public and private organisations.

If you live in Henley and are interested in ethical investment, read The Guide to Sustainable Investment 2013 for more information, and The Guide to Ethical Financial Advice 2013  to find a specialist ethical financial adviser near you.