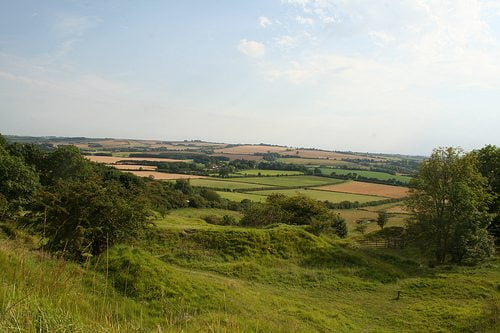 Lincolnshire is set to receive £30m investment from French-based oil and gas firm Total SA to investigate the county’s shale gas potential. Hydraulic fracking, or fracking, is banned in France, so the UK, where it is not, is ripe for exploitation. Our publisher and Lincoln city resident Simon Leadbetter looks at why this is such a bad idea and the company behind it.

Hydraulic fracturing is a method of extracting gas locked in shale (a fine-grained sedimentary rock composed of mud, clay and other minerals), deep beneath the earth. A well is drilled vertically then horizontally at depth where explosive charges are detonated under the ground to create holes in the shale. A toxic cocktail of chemicals, sand and water is then forced into the well under incredible pressure to literally fracture the rock, releasing the gas back to the surface, where it is captured and trucked or piped off to supply gas-fired power stations.

According to the US Energy Information Administration, there are 48 shale gas basins in 38 countries globally. The UK is one and has significant reserves of this type of gas.

The coalition government is pursuing the exploitation of shale gas to tackle the coming energy supply crisis, declining North Sea oil and gas supplies and revenue, and the political headwinds from unprecedented energy price rises. This support includes significant tax breaks for companies developing the wells and, as of Monday, financial incentives in the form of 100% business rate income retention for local councils that support it.

Shale gas has been a massive economic boon to the sparsely populated US, and created windfalls for individuals who own the resources beneath their land. The UK is nearly 20 times more densely populated than the US and our citizens do not own the resources under their land, the government does. The opportunity for fracking developers to offer generous financial incentives to households does not exist in the UK, hence the ‘incentive’ to our locally elected officials.

The Obama administration has argued that shale gas exploitation will cut US carbon emissions. Indeed, in 2012 they fell to a 20-year low. However, the Council of Scientific Society Presidents wrote to the president in 2010 to say that long-term-effect greenhouse gases from shale may be greater than previously appreciated. When compared to conventional gas, shale gas emits large amounts of methane – a far more potent greenhouse gas than carbon dioxide.

Gas is less carbon intensive than coal or oil, but significantly more carbon intensive than renewables. Unlike renewable energy, which feeds directly into the domestic grid, gas is sold on the wholesale markets globally, so there is no immediate domestic energy bill benefit from its exploitation. Shale gas wells have also shown rapid decline in production, but their development opens up the option for carbon-intensive shale oil.

Ed Davey, the energy secretary, and Cuadrilla, a major fracking developer, both admit that extracting shale gas will generate no reduction in energy prices. Lord Stern, the author of a wide-ranging 2006 review into the economic implications of climate change, described any such suggestion as “baseless economics”.

Unlike renewables, where local planning laws apply, communities, households and individuals have no say over fracking development. The government and companies developing this resource assure us that this is all perfectly safe and beneficial.

But our government and leading politicians have an unhealthy relationship with the oil and gas industry. A government that is cutting local authority funding and incentivising the acceptance of fracking to offset those cuts cannot be said to be impartial.

The Conservative party has received several hundred thousand pounds from energy, oil and gas companies since 2010. A prime example of the link is Peter Lilley, MP for Hitchen and Harpenden and member of the energy and climate change committee. Lilley has a lucrative directorship with Tethys Petroleum, currently developing a natural gas field in one party state Kazakhstan. Clearly he has no conflict of interest in being one of only three MPs to vote against the Climate Change Act in 2008.

So this is the greenest government ever, whose claims we are supposed to believe about shale gas. In short, we shouldn’t.

Who is the company behind this latest shale gas development, and should we welcome it to our county with open arms?

Total SA is one of six supermajor oil companies in the world (the others are BP, Chevron, Exxon Mobil, Shell and ConocoPhillips). Based in Paris, France, the company has revenues of €182 billion (£151.7 billion) and profits of just under €11 billion (£9.2 billion). It employs 97,000 people and is the 12th largest company in the world by revenue and 48th by market capitalisation.

In the long litany of alleged controversies surrounding Total, here are a few examples. It has been accused of bribing officials in Malta; breaching EU restrictions on investing in the military dictatorship of Myanmar; corruption in Italy; breaking sanctions to bribe Iraqi officials under Saddam Hussein and importing oil from Iran; bribery in Iran; and breaching international law in Western Sahara. It is also linked to killings and forced labour, again in Myanmar.

Environmentally, Total caused a 400km oil spill from La Rochelle to Brittany in 1998, ran a chemical plant in Toulouse that exploded in 2001 (this led to 29 deaths, including one school pupil, 2,500 people seriously wounded, 8,000 light casualties and two-thirds of the city’s windows shattered) and owned the tanker Erika which broke in two in 1999, causing a major environmental disaster. In each case, it fought to avoid any sanction and fines, but ultimately lost.

So this is the ethical and environmentally-friendly company whose claims we are supposed to believe about the harmless nature of shale gas extraction. In short, we’d be fools if we believed anything they said.

Fracking will certainly bring inward investment, hundreds of jobs and substantial tax revenue. But at what cost? It will certainly bring significantly increased air pollution, water contamination, heavy road traffic and earth tremors or quakes. Sufferers of asthma, road users, water drinkers and those living in older properties should not welcome this development. Anyone concerned about our unhealthy addiction to dirty fossil fuels should similarly reject further unnecessary and uneconomic exploitation of this resource.

My advice to all voters in Lincolnshire would be to vote for those parties that oppose the development of fracking. Lincoln and North East Lincolnshire elect councillors and the East Midlands returns five MEPs in May.

Write to your sitting MP and local councillor and say no to this harmful and reckless development. They work for you, not Total.