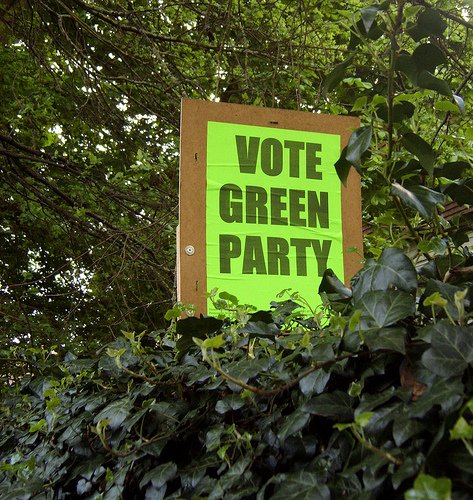 The Green Party of England and Wales announced its new leader earlier this week, and appears to be going from strength to strength with each election. But as Charlie Wood asks, can the party ever seriously challenge the dominant political heavyweights?

The Green Party of England and Wales is having an interesting year. Assembly member Jenny Jones secured almost 100,000 first preference votes in the London mayoral election, placing the Greens ahead of the flagging Liberal Democrats, and the resurgent UKIP, in third place.

The party’s Brighton ‘experiment’, where they control the local council, seems to be going fairly well (although ‘meat-free Mondays’ may have been a bit too much, too soon). The star of the Greens, Caroline Lucas, the party’s historic first MP, raised eyebrows earlier this year by announcing she would be taking “a strategic approach to leadership” by resigning as leader.

Stepping into her shoes, as was announced on Monday, is former Guardian Weekly editor Natalie Bennett, who completes a trinity of prominent females at the peak of the party pyramid. And she may vindicate Lucas’ decision to step down by broadening the party’s reach within the media, and sharing the burden of responsibility for the Green brand.

Bennett may also become a national figure in her own right, but the challenges the Green Party faces over the next few years will require more than a change in personnel.

In the 2010 general election, Lucas became only the second Green Party candidate globally to be elected to parliament under first-past-the-post. This antiquated electoral system (full disclosure – I campaigned for alternative vote) inhibits smaller parties like the Greens and UKIP – as well as somewhat larger parties, such as the Lib Dems – from translating national votes into parliamentary representation; the Greens won 285,616 votes in 2010, yet only the 16,238 secured in Brighton made any difference to their seat-count in Westminster.

Now, after the overwhelming ‘No’ vote in last year’s AV referendum set back electoral reform for a decade or more, it seems that the Greens will do well to merely consolidate Lucas’s Brighton seat.

In these circumstances, it is increasingly important for the party to become more than a single issue in the minds of the electorate. The Greens must promote their entire liberal-left manifesto in order to pick up votes from disaffected Lib Dem supporters that can’t quite bring themselves to vote Labour, as well as left-wingers unconvinced by the socialist credentials of Ed Miliband.

The party’s ‘mission statement’ – Policies for a Sustainable Society – incorporates its environmentalist ethos within a full manifesto framework, and includes policies in opposition to tuition fees and (somewhat surprisingly) European integration, alongside libertarian approaches to drug-use and gay marriage.

At this stage of the parliamentary cycle, the electorate should be fully aware of all these positions (and I fear they are not). Bennett has a huge task at hand, and she would do well to seize this moment via a tour of the networks. Andrew Neil, Adam Boulton et al may be tough customers, but they do facilitate parties such as the Greens in getting their message across.

The impact of environmental issues on recent UKpolitics is apparent: the Conservative’s slogan of “Vote Blue, Go Green” is a telling (and, in hindsight, rather cynical) example of the perceived influence of green issues, and the Lib Dems have made energy policy one of their key missions in government.

A strong Green Party is essential in forcing this agenda, but a seat at the top table is one thing – moving to the next level will be twice as difficult and require a lot more work. I for one hope they get a proper hearing.