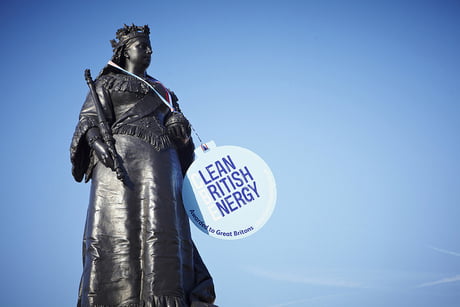 The stunt marked the launch of a new partnership between Good Energy and Friends of the Earth to promote its Clean British Energy campaign, calling on the prime minister to cut carbon emissions and create new jobs and industries by supporting home-grown energy from the sunshine, wind and water.

“Renewable energy sourced in the UK is better for our energy security and will lead to lower and more stable prices in the long run”, says Good Energy’s CEO, Juliet Davenport.

“People need to send a strong message to the government that they’ve got a once-in-a-lifetime opportunity to get this right; if they blow it we’ll be tied into gas and expensive nuclear and prices will continue to spiral higher.”

And it’s not just Good Energy that think renewables are the only way forward. Recent polling by Friends of the Earth found that 85% of British people want Cameron to ditch dirty, imported fossil fuels in favour of renewable power from the UK.

When people were asked which sources of energy they would most like to see providing more of their electricity in ten years’ time, 64% backed wind, wave, solar or tidal power, while just 2% of those polled backed gas.

With the majority of British people backing renewables, it can only be a matter of time before our government is forced to act.

And one of the best-known supporters of the campaign firmly believes this: Dragon’s Den star Deborah Meaden.

“David Cameron needs to listen to the public and say ‘I’m in’ to clean British energy, opening up a multibillion pound opportunity for British businesses”, Meaden says, in a Friends of the Earth campaign video.

“Gas, coal and nuclear are the technologies of the past. Our country has the skills and the talent to be world-beaters in the renewable energy technologies of right now. Friends of the Earth’s Clean British Energy campaign would switch the UK to home-grown clean power – we can’t afford not to.”

Moving to renewable generation is a fantastic opportunity to put energy in the hands of the people that use it. Since its transformation in the 1990s, the UK energy market has been dominated by six big players controlling over 99% of the energy supplied to our homes.

But the introduction of the government’s feed-in tariff in 2010 was a step in the right direction. The scheme, which gives financial support to small-scale renewable electricity generators such as people with solar panels on their roof, saw 320,000 new generators enter the energy market  and brought energy directly to people’s homes and businesses, cutting out the bigger players.

It meant there were suddenly thousands of small energy market players rather than just six. It’s an inspiring model for the future of British energy.

If you’re not yet a Good Energy customer, now’s the time to switch and show you care about our energy future. And we’d love to hear about why you’ve switched to clean British energy – please post your comments.

If you’re already a Good Energy customer then please sign the petition to energy minister Ed Davey and encourage your friends and family to do the same. You can spread the word on Twitter and Facebook too, just use the hashtag #getCBE.