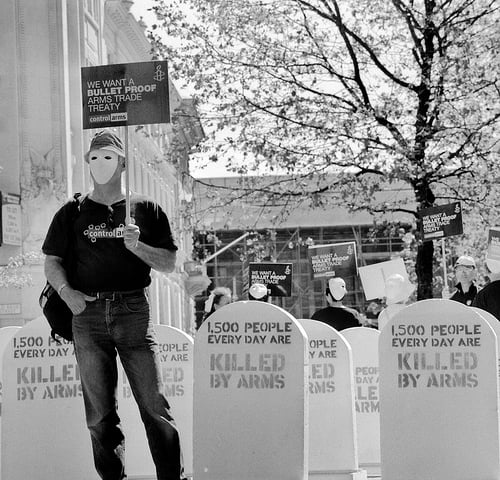 On this day in 1997: Princess Diana triggers landmine row

Government ministers were angered in 1997 after the Princess called for an international ban on landmines after seeing victims in Angola. With news that a Yorkshire arms broker has been convicted for illegal arms trades and a massive increase in EU arms sales, is it not time that the arms trade is far more tightly controlled and suitable for divestment?

There are three core roles for government; external security, domestic security and the stability of the economy. That first role requires an effective defensive military capability and we need an arms industry to manufacture that capability. Even right-to-bear-arms Americans have a requirement for weapons to be held by a ‘well-regulated Militia’ in their oft-misquoted second amendment (written in the time of muskets), not an automatic weapon free-for-all.

Other nations have a right to defend themselves, too. Selling weapons to our allies to defend themselves against our enemies is realpolitik in action: my enemy’s enemy is my friend – a philosophy that had such disastrous repercussions when we armed Saddam Hussein against Iran.

Where the arms industry crosses the line is in arming the unregulated citizenry with military grade weaponry, or selling arms to countries that use them to oppress their own people or wage wars of aggression. In this feature we’ll focus on the latter.

Selling weapons to enemies has to be a bad idea, as we discovered with Sea Dart surface-to-air missiles (SAMs), Sea Cat SAMs, Blowpipe SAMs, Lynx helicopter and Type 42 Destroyers during the Falklands War. All British manufactured weapons that were used against British troops.

When in 1997, Princess Diana spoke out against weapons that have a tendency to maim or kill the innocent, Conservative ministers were quick to attack her. The junior defence minister at the time, Earl Howe, described the princess as a “loose cannon”, ill-informed on the issue of anti-personnel landmines.

Peter Viggers (now Sir), Tory member of the defence select committee who stepped down in 2010 as a result of the investigation of MPs’ expenses (he’s the Duck Island guy), said at the time, “We all know landmines and other weapons are vicious and nasty. The question is how best to negotiate so they are not used in future. The government’s policy on this has been an extremely careful one and the statements made by the Princess of Wales have not been in line with that policy.”

By December 1997, Diana had tragically died and the Ottawa Treaty, or Anti-Personnel Mine Ban Convention, had been signed by 40 countries, amongst them the UK. To date, 160 nations have signed the treaty, with China, India, Russia and the United States being notable exceptions.

Fast forward 16 years and the EU’s Fourteenth Annual Report on Exports Control of Military Technology and Equipment reveals that in 2011, EU countries licensed arms exports valued at €37.5 billion (£31 billion) – an increase of almost one fifth on 2010. The largest and fastest growing markets for weapons were in the Middle East and Asia, including countries embroiled in the uprisings of 2011, while Saudi Arabia replaced the USA as the largest customer.

Does selling weapons to the Middle East at this time seem like a good idea to anyone?

The report was published on December 14 2012, without a press release from the EU Council or an announcement on the European Parliament website. Groups from the European Network Against Arms Trade (ENAAT) are discussing the report and its shortcomings.

“The report is a huge document, packed with figures, but without analysis of the contents or comparison tables with data from past years”, said arms analyst Giorgio Beretta of Rete Italiana per il Disarmo (Italian Disarmament Network).

“Also, as in previous years, the report is incomplete and lacks information on arms deliveries – information which is unavailable in several EU countries, including Germany and the UK.”

He is critical of the lack of transparency in the EU report and of the time taken to deliver statistics, which were already obsolete: “It seems to take a whole year for EU officials to receive and assemble the data from national reports: reports on exports of turnips and potatoes come faster than those of arms.”

Wendela de Vries of the Dutch Campagne tegen Wapenhandel (Campaign Against Arms Trade) expresses the hope that the report – unlike previous years – will be discussed in the European parliament as an issue with huge relevance for human rights, peace and security. She said, “Given that the EU has now joined the ranks of the Nobel Peace laureates, we call for action to close the gap between the EU’s peace rhetoric and its profiteering from war preparations.”

The report reveals that the major EU arms exporting countries in 2011 were:

1. France (€9.9 billion/£8.2 billion) – who sold to Argentina the Exocets that proved so effective against HMS Sheffield during the Falklands War, with the death of 20 British servicemen

These five countries were the source of over 80% of EU military exports.

More figures from the report can be found on Campaign Against the Arms Trade’s website.

The EU Non Proliferation Consortium analyses and produces papers on the EU report. You can read its latest analysis here.

At some point, governments and investors need to decide if manufacturing and selling weapons to regimes in unstable region is worth the short-term profit or be compelled to pay punitive damages to the victims of the weapons they have funded and profited from.

Diana may have caused a political row over her legitimate concerns over landmines, but she probably did not go far enough in her criticism. Sadly, she never got the chance to do so.