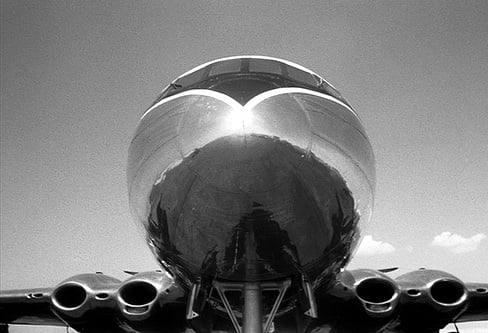 Sixty-one years ago today, aviation was revolutionised when the BOAC Comet took off from London to make its first ever journey. Its inspiring design led to a new era of smoother and faster air travel, but what is its environmental legacy?

Carrying 26 passengers on an over 23-hour journey of nearly 7,000 miles, and stopping in Rome, Beirut, Khartoum, Entebbe, Livingstone and finally Johannesburg, the jet’s maiden flight transformed a travel industry that is now an essential feature of both business and leisure activities.

Travelling by air has helped shaped global tourism, and is often the fastest and most comfortable way to reach destinations. Purchasing tickets is easy and convenient, and airliners have played a significant role in the defence of our countries.

Nearly three billion people take flights every year, and the industry employs over eight million people worldwide. And while it only carries 0.5% of world trade shipments in volume, it carries 35% by value.

However, despite the temptation to travel by plane, using air transport does come with its disadvantages.

Due to high operation costs, including the need for construction and maintenance of aircrafts and airports and hiring qualified and experienced employees, the cost of flight tickets can be rather expensive. Air transport is also often impacted by severe weather conditions, sometimes resulting in the cancellation of flights and on many occasions, damaging the planes.

Reading about plane crashes in the media can also hinder the experience of the journey for some passengers. Indeed, exactly a year after its maiden flight, the Comet suffered its second fatal accident, killing all 43 passengers after running into a thunderstorm in India.

Others, meanwhile, are rightly concerned about the industry’s environmental impact.

Contrails (the white clouds that you see trailing behind jets) have been found to trap the long-wave radiation from the Earth, causing a warming of the atmosphere which directly contributes to global warming.

Meanwhile, a report by the Stockholm Environment Institute further outlined the environmental impacts of aeroplanes in detail, covering how the industry’s emissions of water vapour, carbon dioxide, nitrogen oxides and methane contribute to air pollution and greenhouse gases.

With the UK government recently in court for breaching illegal limits of air pollution and the EU rejecting plans to make the largest polluters pay more for their carbon emissions, the continuing development and growth of the air transport industry is likely to further increase greenhouse gas emissions and as a result, users will more than likely face higher prices in plane tickets.

Blue & Green Tomorrow’s Guide to Sustainable Tourism 2013 looks deeper into the issue of air travel, asking whether it is sustainable, while also outlining a number of more responsible tourism options.