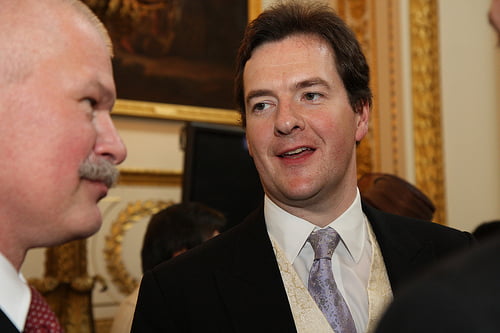 George Osborne spoke with passion when asked by the BBC to give the “economic case” for HS2 yesterday. Alex Blackburne writes how the chancellor’s answer revealed his true colours when it comes to renewable energy.

The second phase of the government’s controversial high-speed rail network was revealed a little over 24 hours ago. The latest announcement said that the £32 billion project will connect Manchester, Leeds, Sheffield and the East Midlands, with phase one joining Birmingham with London.

At a time when economic growth – and even more importantly, sustainable economic growth – is highly sought after, following the news last week that the UK’s economy shrank by 0.3% in the final quarter of 2012, HS2 marks a step forward in the government’s plans to revitalise its transport infrastructure, even if there have been some pretty strong and justified arguments against its development.

Speaking to BBC Breakfast yesterday morning, George Osborne waxed lyrical about the economic potential of the newly-unveiled plans. But reading deeper into his comments brings to light some confusing signals regarding the UK’s long-term prosperity.

He said, “I think [HS2] is the engine for growth in the North and the Midlands of this country; I think it’s going to create tens of thousands of jobs here in Manchester [and] across our great cities, and in the end as a country, you’ve got to make those long-term choices.

“If our predecessors hadn’t decided to build the railways in the Victorian times or the motorways in the middle part of the 20th century, then we wouldn’t have those things today. So you’ve got to commit to these projects even though they’ll take many years.

“And yes, they’re expensive, but they’re also an investment in an economy that will then create the money that will enable us to afford to NHS, the education system and so on.”

We’re so used to hearing the chancellor come out with such soundbites as “we’re all in this together” and that the government has “tough decisions” to make (see George Osborne Bingo) that when he said something about ensuring sustainable investment for the good of the UK’s future economy, one could be forgiven for being slightly taken aback.

What’s sad, though, is that Osborne clearly has an ideological agenda against renewable energy. His comments about HS2 prove that he gets the notion of green growth and investing for the long-term to benefit people, the planet and prosperity. Weaning ourselves off dirty, expensive fossil fuels in favour of cleaner sources of energy is possibly the most important facet of this.

An undercover Greenpeace investigation in November recorded climate sceptic MP Peter Lilley saying that the chancellor “doesn’t need persuading” when it comes to launching an anti-wind revolt within government, and his autumn statement a month later did little in dispelling this view.

“Mr Osborne, it is highly debatable whether our economy is healing. What is certain is that our planet is hurting and we needed you to do so much more”, we wrote at the time.

Despite displaying opposing political allegiances, Labour leader Ed Miliband and Conservative MP Zac Goldsmith both warned last year that potential investors could lose interest in the UK if the squabbling, uncertainty and instability within government continued.

The publication of the energy bill went some way to reinstalling confidence in the green economy, but its lack of a decarbonisation target and its heavy reliance on gas not only undermines some of the incredible work being done in the renewables industry, but also makes the UK’s job harder in terms of meeting legally-binding carbon reduction targets.

Osborne should be applauded for wanting the UK to make long-term, sustainable economic choices. But sadly, he’s so far ignored what the public wants and done his best to reject one of the biggest growth industries we have at our disposal.