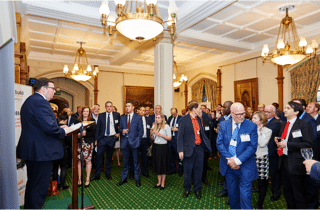 Last night at a House of Commons reception, Ecobuild 2017 was launched. More than 100 construction industry professionals and CEOs were in attendance for the annual All Party Group for Construction and Urban Development meeting. The focus for next year was revealed as regeneration.

The theme of regeneration will be brought to life through Ecobuild’s immersive exhibition and conference programme that will tackle redefining sustainability, future growth sectors and the housing crisis.

The announcement follows the launch of Ecobuild’s #SustainabilityIs campaign earlier this month, during which industry professionals were challenged to answer: ‘what sustainability means now, and in the future?’ The event organisers have already received an extraordinary and impassioned response from organisations including Saint-Gobain, BRE and the Construction Products Association (CPA). The campaign will continue in the run up to Ecobuild 2017 and will provide the sector with a variety of opportunities to contribute to the ongoing debate.

Speaking at the House of Commons reception, Martin Hurn, Brand Director at Ecobuild, said: “Ecobuild 2017 event will bring together the largest collection of architects, contractors, specifiers and product manufacturers making it the perfect platform to collaborate and address the key issues of regeneration and its role in shaping the future of sustainability.

“From the response we’ve had so far, it’s clear that sustainability has many nuances and meanings but it’s also evident that a common definition and understanding is needed.”

This was a view also shared at our recent round table discussion, chaired by Julie Hirigoyen, CEO of UK-GBC, and attended by a host of senior construction leaders.

Martin continued: “Regeneration and future of sustainability are already critical issues for the industry, yet, following the EU Referendum result, the topics will, arguably, become even more pressing as UK businesses shoulder further responsibility to advance the agenda.”

Hints of what visitors can expect from Ecobuild 2017 were also revealed at House of Commons event, including a new central feature – Regeneration Drive. This impressive full-length boulevard will include city-themed attractions, such as a stadium, city hall, university campus and an energy grid.  Additionally, the exhibition will feature CPD sessions on the key themes such as the housing crisis, infrastructure and public and private sector investment.

Concluding, Martin added: “Innovation and creativity – something which the UK is renowned for globally – will also be a big focus next year, with demonstrations of new products, smart technologies and future materials. We’re actively looking for partners to help us develop these inspiring places and spaces, including concepts for Regeneration Drive.”

For more information on Ecobuild visit www.ecobuild.co.uk or join the debate on social media using #SustainabilityIs.